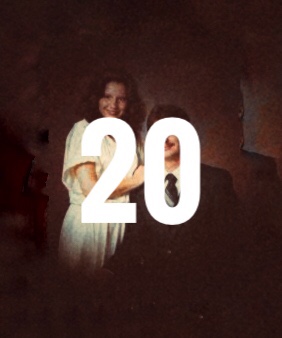 (Author Note:  Life continues to be busy.  I was once again not be able to add days 26 thru 21, but hope to continue now from Day 20 to Day 1…the last remaining days before our 40th Anniversary on July 15).

Yes, I wrote that correctly — The Merried Life.  As our 40th Anniversary approaches, I want this post, representing 20 days before the said date, to show some of the Merry things of married life.  Over the past 14,591 days of our marriage (including today), we have had many unique and fun experiences, making life Merry.

The worst thing about these merry events in life is that, in most cases, I don’t have photos.  Most of the photos in this post are captured from the internet.  I don’t like to use other photos.  I prefer my own, but these do get the point across.

Back when we celebrated the first year of our marriage I got one of our photos and glued it to a red plaque and then wrote on top with paint, “Merried Life.”  It was meant to represent the joy I had with her in our first year together.  The plaque is still around, probably buried in one of our many boxes of memories. 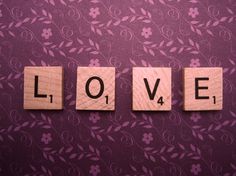 From the beginnings of our marriage, Julianne and I have spent many hours together playing Scrabble.  This seems to have been our go to game over the years.  In fact, in the earlier years, the statistician geek in me kept a “Scrabble Records” book in which I kept track of all of the scores, the 7 letter words, the high scores, the low scores, the Win/Loss records, etc.  In fact, I still have the book in one of my memory boxes!  I will have to be honest…Julianne probably leads in the W-L column from all of the years.  In recent years I have not kept track, but I will bet it is something like Julianne 1220, David 850.  Nowadays, we continue the games but they are online on our mobile devices, so the togetherness, laughs, “you cheated” claims and that kind of fun don’t happen as often.

One of our laughable memories comes from our first year of marriage, before kids made their arrival.  I had come home from one evening from work in Provo.  We lived on the second floor of an apartment complex.  As I went to the door, I saw something that gave me the chills…it was actually scary.  In the distance I saw a bunch of glowing lights in the sky flying in weird formation and thought we were being visited by hundreds of UFOs!  No Joke!  I called for Julianne and basically scared her as well.  Turns out that the real culprit was a murmuration of starlings that had static electricity on them.  Living in Kentucky we get to see murmurations of starlings quite a bit.  It is an amazing thing to watch.  But, I will never forget my UFO birds of Provo from 1979.

Another fun memory of ours goes back to Mesa, Arizona when she and I went out to celebrate our fifth anniversary in 1984.  I was a new graduate student at Arizona State University and Julianne was home taking care of children.  I wanted to do something really nice to celebrate our fifth anniversary.  So, I took her to dinner at Red Lobster… a super, big deal treat for us.  We had a splendid and memorable dinner…especially when we got the bill.  It was over $40.  We cringed.  That was a lot of money for us. So, we paid…with some regrets…   As we got into the car, Julianne exclaimed, “David, that was too much.  Let’s take it back and get a refund.”  We didn’t.  But, we also did not ever forget this memorable anniversary dinner.

Another thing we have done together over the years was attending symphony concerts.  We have not done this as often as we have wanted to (especially Julianne!), but we have still made it to one or two a year.  Since Julianne is a talented violinist, this was something important.  In Flagstaff, we would see the Flagstaff Symphony.  We have seen a number of concerts in Kentucky as well. This is always a time of merriment for us. 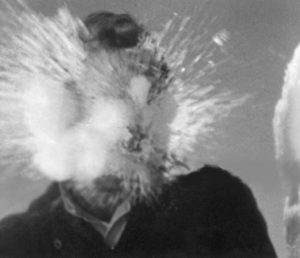 Of course, our children began showing up in 1980 and so our “Merry Times” together soon included the children.  Even with these, we have some fun times and memories of things we all did together.  Perhaps one of the funniest memories took place one winter morning in Japan in 1990 or 1991.  We were all playing in the snow and I was on the sidelines videoing the adventures.  The kids all began throwing snowballs as was Julianne. Suddenly, and without warning, I was splattered in the face with a snowball.  Right in the eye!  I was videoing and got hit good.  Seconds later Julianne was laughing so hard, that I couldn’t help but laugh with her.  It wasn’t funny for about two seconds.  But the timing was impeccable and totally accidental.  I wish I could find that video that captured the second I was splatted.  Even today we laugh about this story. 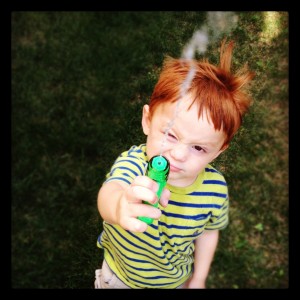 Snowballs are not our only fun.  The Kravetz family has had some serious water fights.  Not talking water balloons here.  Talking BUCKETS of water!   These have been a staple since the days when our kids were younger in Arizona and have carried on with our grandchildren.

With a deck in our backyard in Kentucky, water fights have gone to new levels and there have been times they have found their way into the house.  The more the merrier!! 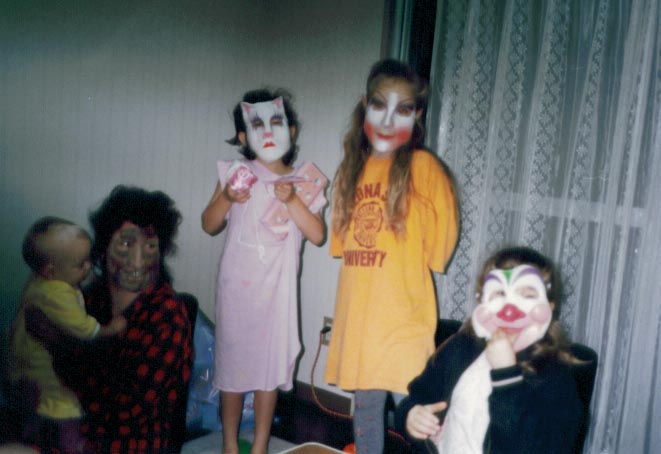 Family Fun with masks in Japan

We once had an interesting Merry Christmas in Japan, thanks to Julianne.  All of the kids got some interesting rubber masks and were able to open them and put them on.  I am not sure if the kids remember this merriment, but I certainly do.  Julianne’s mask of a guy with a cigar in his mouth (not pictured because she wanted the witch for the photo) was priceless!

I am sure there are more memories out there that I have forgotten.  Maybe a second post will find its way in the next few days.

The goofiness and fun-loving nature of both Julianne and I has flowed down to the kids as well.  I am always one for grabbing a fun family photo. So, to close out this post, following are some of our more “unique” family shots from years past. And yes, some of them were taken despite complaints by one or more of the participants.  But, for the fun of merried family life…..  And much of this fun can be directly attributed to the fun creativity of Julianne. 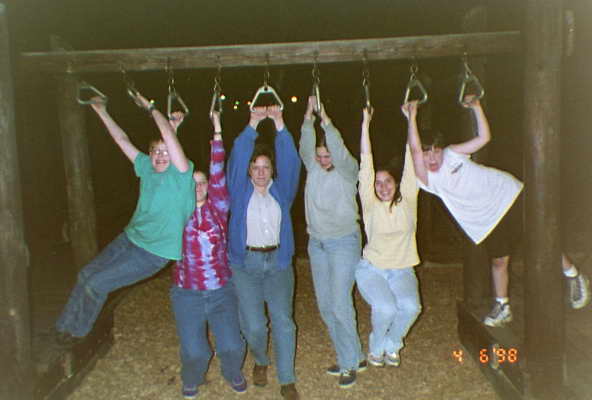 Hanging around at a park in Lexington in the 1998 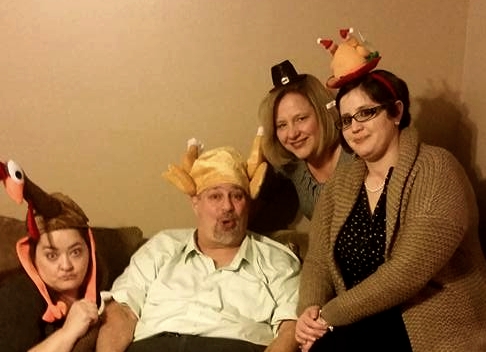 Thanksgiving at Chelsea’s in 2017 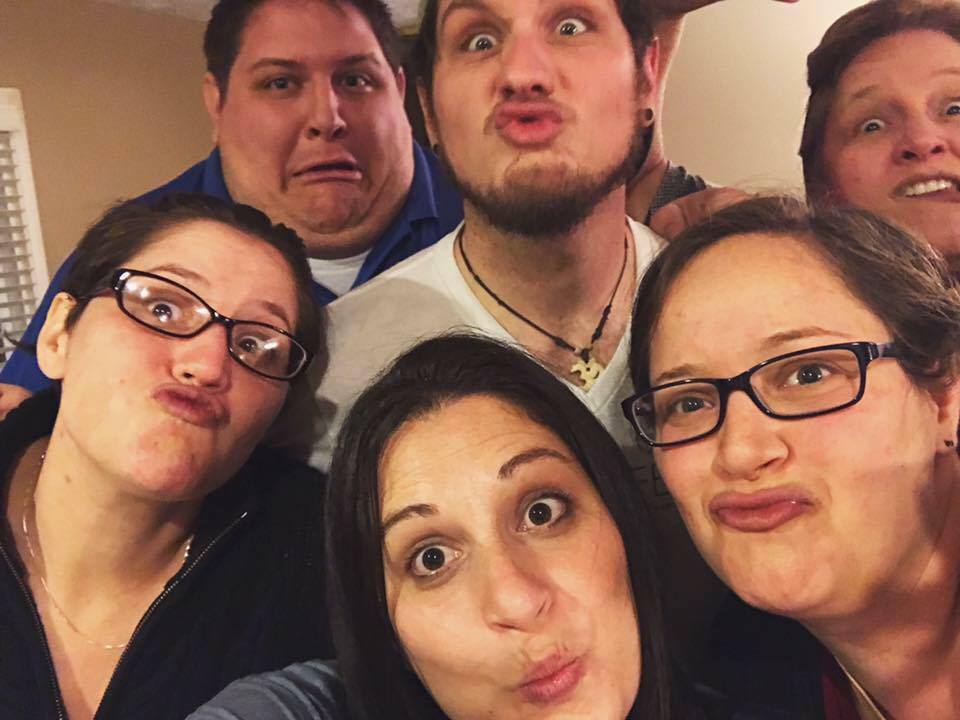 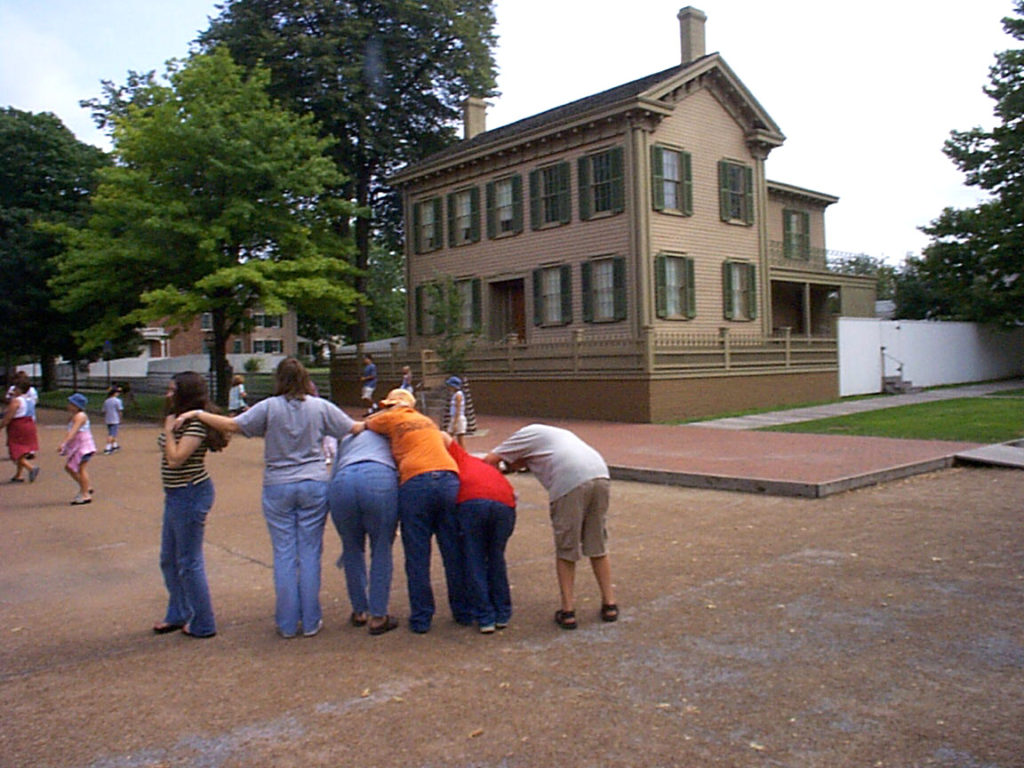 The Ends of the Road (Springfield, Illinois at Lincoln Home) — Marissa didn’t like the idea… But, it WAS Julianne’s idea 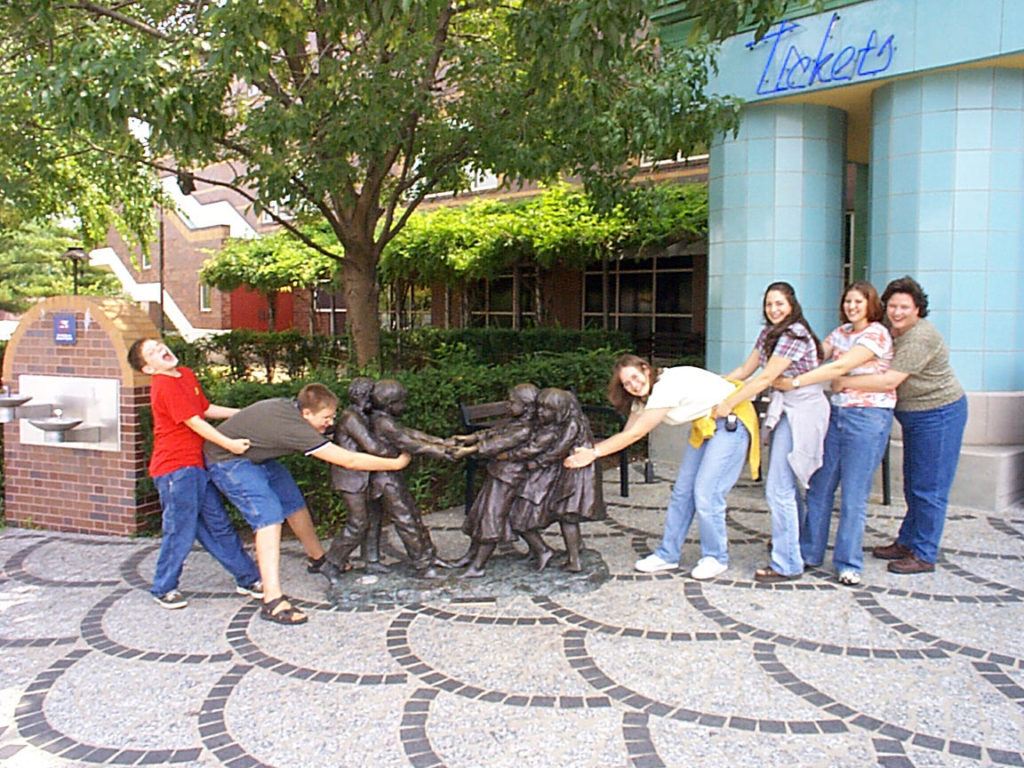 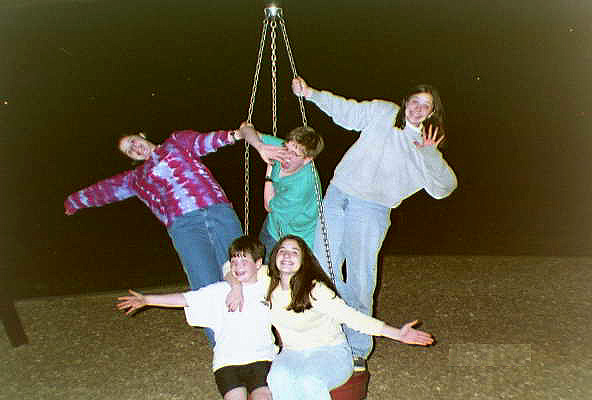 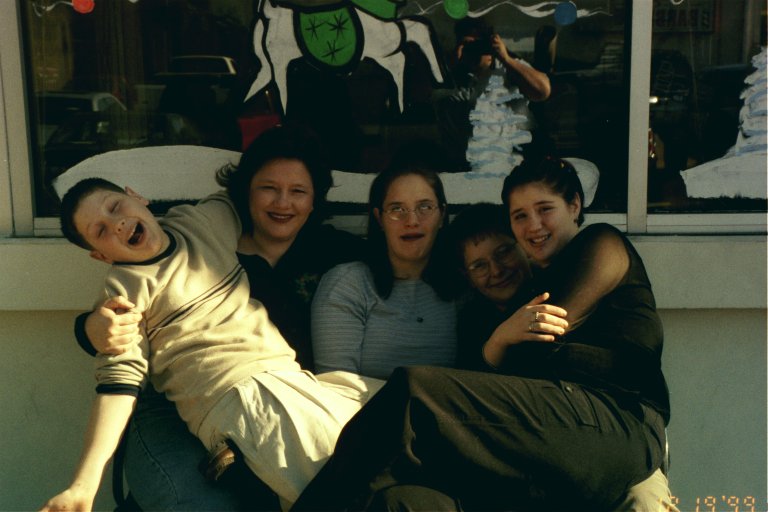 All gathered together someplace in Texas in December 1999

Masked adventures on KravGirls Night Out in December 2015. # Generations in this pic 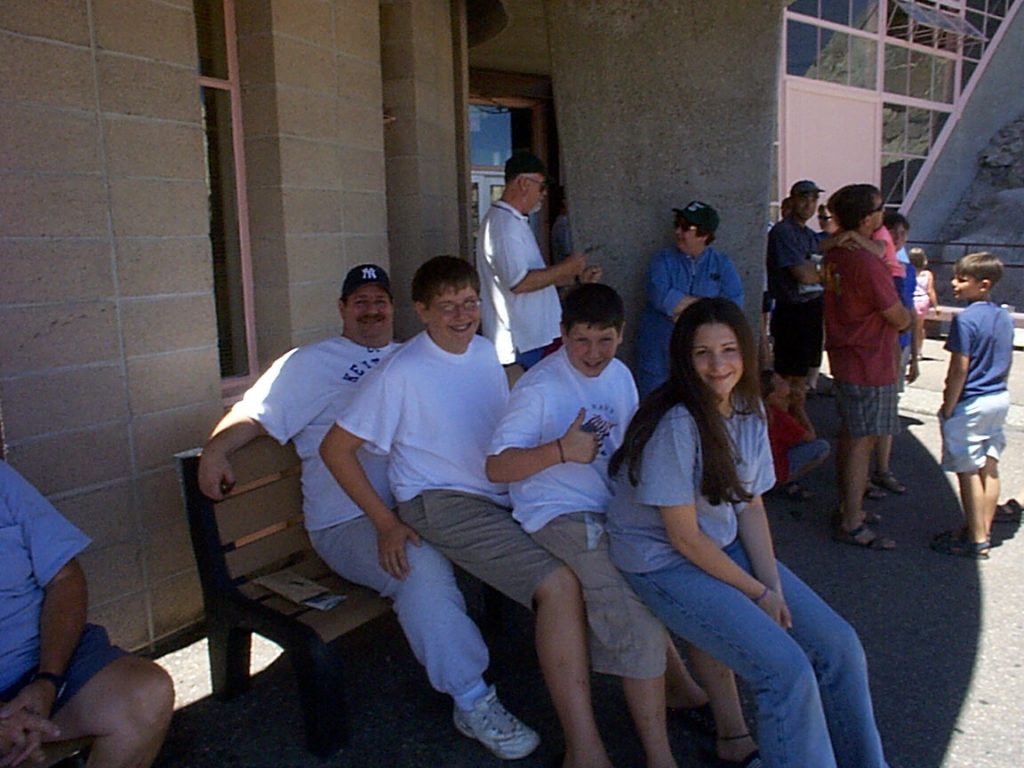 All on one lap…in Vernal, Utah 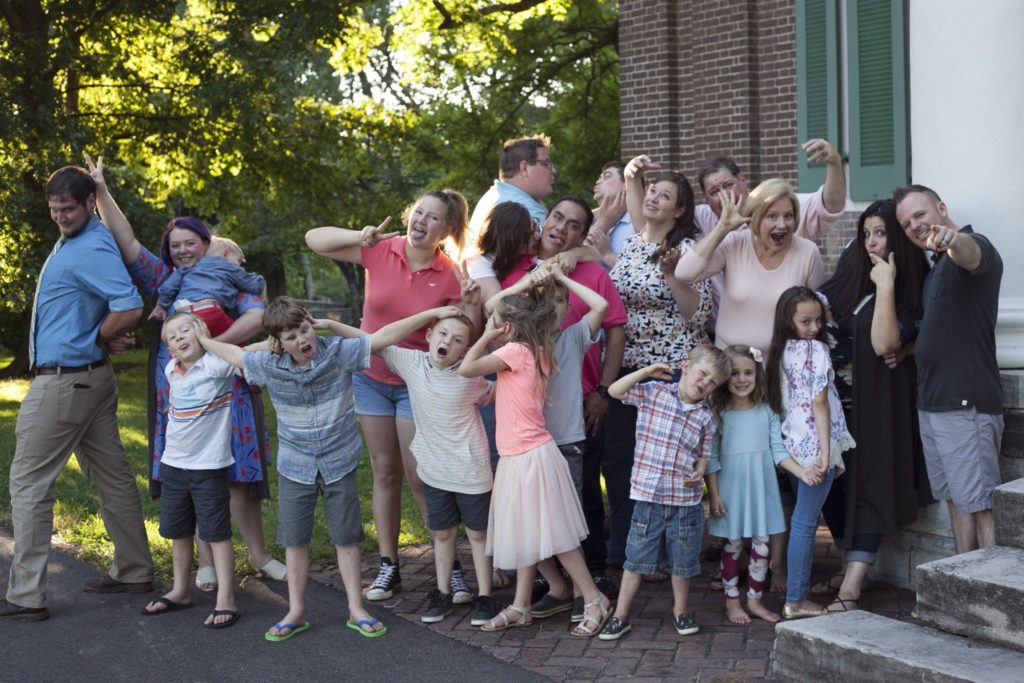 And, we get the grandkids in on it now too. The whole family in prime form – July 2017!