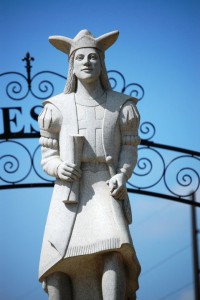 Christopher Columbus in a park near my birthplace in Little Italy, in Cleveland

Today is Columbus Day 2015. When I think of Columbus Day, obviously thoughts of Christopher Columbus come first. But ultimately, I think far beyond him and think about many of the other great explorers that reached out to the world especially in the age of discovery in the 1400s and some even earlier than that.

I am grateful for the bravery, vision and wanderlust in these individuals.  Certainly, they all took risks and many of them went exploring for their respective royalty, who paid them well in hopes of gold and in hopes of converting souls to their version of Christianity.

On this day I see many derogatory remarks about Columbus on Facebook, and perhaps some of it is true.  But, we cannot discount the efforts he made to reach out, as did many others.

A few that I am grateful to have studied and learned about….

A statue of Leif Erikson in Duluth, MN on the shores of Lake Superior

Leif Erikson (b. ca 970 – d. ca 1020): Leif comes from Viking heritage and was likely born in Iceland, though he also lived in Greenland. Around 999 AD he made his way to what is currently known as Newfoundland, but did a great deal of exploring, eventually calling the land Vinland.

According to the stories written in the 1200s, he gathered a crew of thirty-five men, and mounted an expedition towards the land he had heard about from a merchant named Bjarni Herjólfsson described. Leif’s father Erik the Red was set to join him but dropped out after he fell from his horse on his way to set sail, an incident he interpreted as a bad omen. Leif followed Bjarni’s route in reverse and landed first in a rocky and desolate place he named Helluland (Flat-Rock Land; possibly Baffin Island). After venturing further by sea, he landed the second time in a forested place he named Markland (Forest Land; possibly Labrador). Finally, after two more days at sea, he landed in a luscious place with plentiful stores of salmon. As winter approached, he decided to encamp there for the winter, and broke his party into two groups – one to remain at camp and the other to explore the lands. After discovering grapes and vineyards, he named the land Vinland.

Zheng He (1371–1433 or 1435): Zheng was a Hui court eunuch, mariner, explorer, diplomat, and fleet admiral during China’s early Ming dynasty. I first learned about him while in college in a Chinese History class at NAU. I was fascinated. Zheng commanded expeditionary voyages to Southeast Asia, South Asia, Western Asia, and East Africa from 1405 to 1433. Zheng He’s fleets visited Brunei, Java, Thailand and Southeast Asia, India, the Horn of Africa, and Arabia, dispensing and receiving goods along the way.  Zheng He presented gifts of gold, silver, porcelain, and silk; in return, China received such novelties as ostriches, zebras, camels, and ivory from the Swahili. The giraffe he brought back from Malindi was considered to be a qilin and taken as proof of the favor of heaven upon the administration.  He had massive ships and it was said that his fleet had over 24,000 sailors. 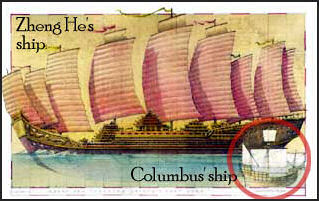 Zheng He ship in comparison with Columbus’s boat 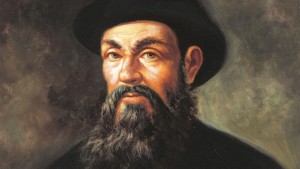 Ferdinand Magellan (c. 1480 – 27 April 1521): Magellan was a Portuguese explorer who organized the Spanish expedition to the East Indies from 1519 to 1522, resulting in the first circumnavigation of the Earth.  From 1519 to 1521 he traveled around the world, many times facing extreme danger, bad weather and even struggled against his own Portuguese leaders.  He eventually died in the Philippines.  On March 16, 1521 Magellan reached the island of Homonhon in the Philippines, with 150 crew left. Members of his expedition became the first Europeans to reach the Philippine archipelago. Magellan relied on Enrique, his Malay servant and interpreter, to communicate with the native tribes. He had been indentured by Magellan in 1511 after the colonization of Malacca, and had accompanied him through later adventures. They traded gifts with Rajah Siaiu of Mazaua who guided them to Cebu on 7 April. 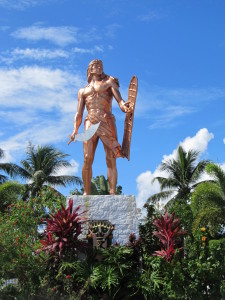 Rajah Humabon of Cebu was friendly towards Magellan and the Spaniards; both he and his queen Hara Amihan were baptized as Christians and were given the image of the Holy Child (later known as Santo Niño de Cebu) which along with a cross (Magellan’s Cross) symbolizes the Christianization of the Philippines. Afterward, Rajah Humabon and his ally Datu Zula convinced Magellan to kill their enemy, Datu Lapu-Lapu, on Mactan. Magellan wanted to convert Lapu-Lapu to Christianity, as he had Humabon, but Lapu-Lapu rejected that. On the morning of 27 April 1521, Magellan sailed to Mactan with a small attack force. During the resulting battle against Lapu-Lapu’s troops, Magellan was struck by a bamboo spear, and later surrounded and finished off with other weapons. 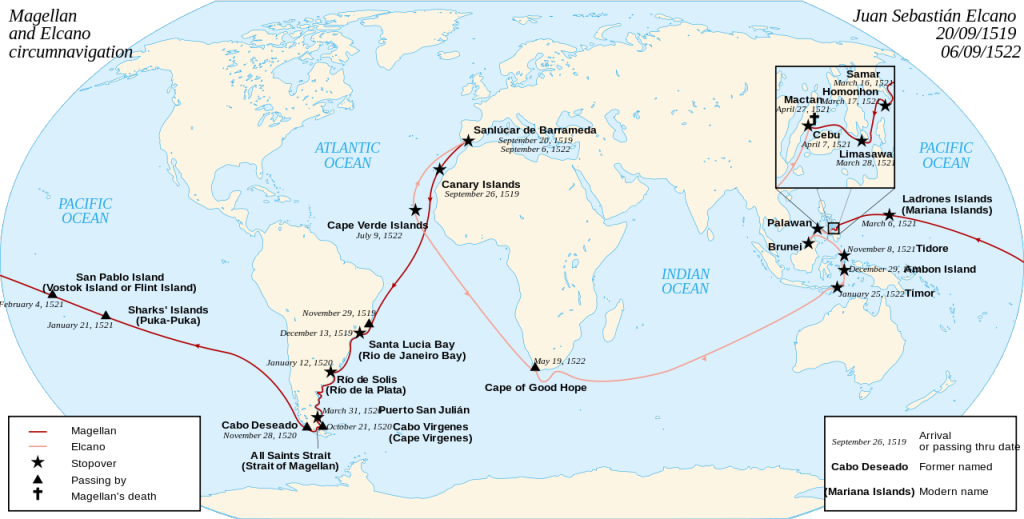 Ironically, I have been to Cebu (see my journals of visits in Cebu) and Mactan and visited the site where Lapu-Lapu’s troops killed Magellan. I am grateful to have set foot in a place where this famed explorer went. 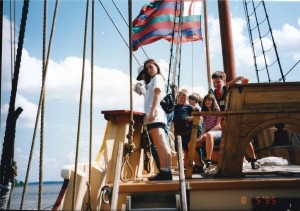 Kids on an ship replia in Jamestown, VA

These four explorers, as well as other greats such as Marco Polo (whom I will have a separate post on), Lewis and Clark (also a separate post) and John Wesley Powell (yet another post) have always meant a lot to me.

I love to travel and am thankful for the spirit of wanderlust and adventure borne into me. Like, Columbus, Magellan, Zheng and Erikson, I seek after new and unique places.  It is a different world today, but I have still been blessed to experience some of the same things – the smells and sights of China, the Philippines and Japan. The varied landscapes of the United States and Canada. The oceans and Great Lakes. 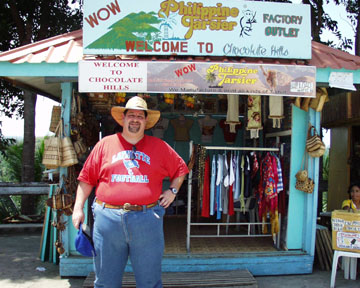 Visiting the Chocolate Hills in Bohol Philippines in 2005

Truly, I have been blessed with the spirit of adventure and I am grateful to be able to walk the paths and read the stories of their encounters.  They have made the world a smaller place.