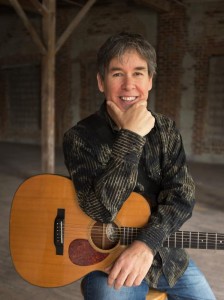 Over the past twenty years I have been very fortunate to meet some amazing musicians due to my long friendship with musician Antsy McClain. Through him I also met the amazing producer and music aficionado Eddie Mattiningly, who introduced me to some of these amazing musicians and people. These are phenomenal guitarists yet are not “all about themselves” as they are friendly, giving and caring.  Among these, there are a group I call my “guitar heroes.” Some of them I have not met, but most I have and with some of them I have been blessed to develop a friendly relationship. 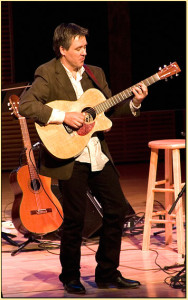 The first of these I want to mention is Pete Huttlinger. I have had the amazing blessing of getting to know Pete and his wife Erin over the years. I first met them at a show in Elizabethtown, KY and actually did some videos of Pete, which I have on my YouTube site (one of which I have shared below).  Pete is one of those fine musicians who made others even better.  He toured the world with John Denver over the last four years of Denver’s life.  He has performed with LeAnn Rimes in many places around the world and on television.  Currently he also does some performances with John Oates of Hall and Oates.

But, he is also an amazing musician on his own.  He has released a number of albums including my favorite, McGuire’s Landing.  He has done an entire CD of Stevie Wonder tunes (including Superstition as can be seen in the video below – filmed and edited by Sumoflam Productions).

But, there is another less known side of Pete.  He is a survivor. About five years ago he had a major stroke that caused him to be paralyzed on his right side and rendered him speechless. He went through a scary surgery only to find that he had a defective heart.  His wife and many of his friends and fans prayed often for him and Erin stuck with him through thick and thin.  He is now back on the road performing and doing what he loves best…playing fantastic guitar licks to satisfy the musical hankerings of many like myself and entertaining those who attend his shows. His playing style is heart-warming.  His person is even more so. 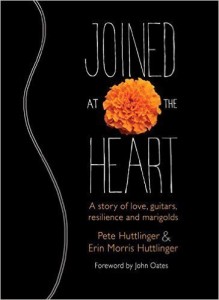 He and Erin have recently published a book called “Joined at the Heart.” I have recently obtained a copy and can’t wait to read it.  The book is all about his struggle and the struggle of his dear wife Erin.  And, moreover, it is a love story — it is all about their joint effort in love and humor to overcome the dire adversity that they faced.  I know it will be inspirational and uplifting.

Pete is a survivor.  Erin is a survivor.  And I am grateful for their acquaintance and the inspiration they provide — even more than the heart-soothing sounds of Pete’s amazing musical talents.

Knowing them is a true blessing in my life.