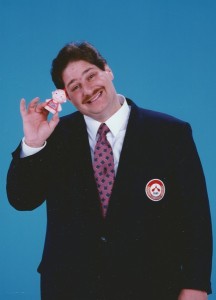 Happy Throwback Thursday!  This is the first of my #TBT looks back on my work with me in Japan and around the US over the years.

Perhaps the most viewed item in my career, the following video includes the original Asahi Solar TV commercial from Japan, which aired all over the country for nearly half of 1990.

I have not written much about this video, though it has had extensive viewing since I posted it on YouTube a number of years ago.

Basically, at the time it was taken, I was the Director of International Business for Asahi Solar Corporation, which was Japan’s largest marketer of rooftop installed solar water heaters.  In the 1990s it was a big business. 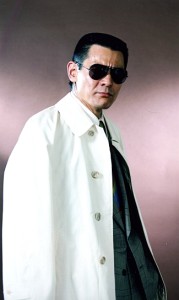 Bunta Sugawara in one of his mob boss roles.  He died in November 2014

We had a famous actor from Japan, named Bunta Sugawara (8/16/1933 to 11/28/2014), who did most of our TV commercials.  He was (and still is) famous and was like a mix between the Charles Bronson and Clint Eastwood of Japan.  The producers of the commercial didn’t feel that he was a fit for the theme of this particular commercial, though he was included in a bit part on it.

This particular commercial included a little doll called “Solar Bo” and was a bit too goofy for his liking.  So, they chose a big “gaijin” (foreigner) to do the part (that was me!).  I was to go to the Dentsu Advertising Agency’s recording studios in Tokyo and spent over 8 hours in a fake bathtub that was heated with an electric prod every hour, while they filmed the two 30 second spots.  We did a number of takes.  It was fun, but it was also grueling.  The video below contains the commercial as well as a collection of outtakes by Dentsu synched to the music of the Ghostbusters theme.  Yes, I am in a bathtub flying over Tucson!! 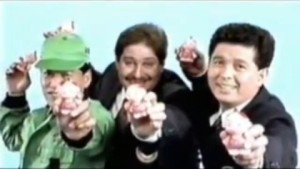 After the commercial began to air, I had some minor celebrity as I traveled the country for Asahi on business.  People at airports and train stations would come to me and ask if I was the guy in the commercial.  It was fun and was an amazing ride!  Without further adieu, here is the video of the commercial and also the outtakes.  Enjoy!!