Last week I put up a post on my Less Beaten Paths travel blog noting how writing that blog lead to a reinvention of myself and my career path (and also celebrating that blog’s 50,000th visit). This post is a follow-up to that one and I do it on my Sumoflam’s Singlewide blog because it’s not really associated with travel (though I do note some travel things in here….let’s face it, its in my blood). 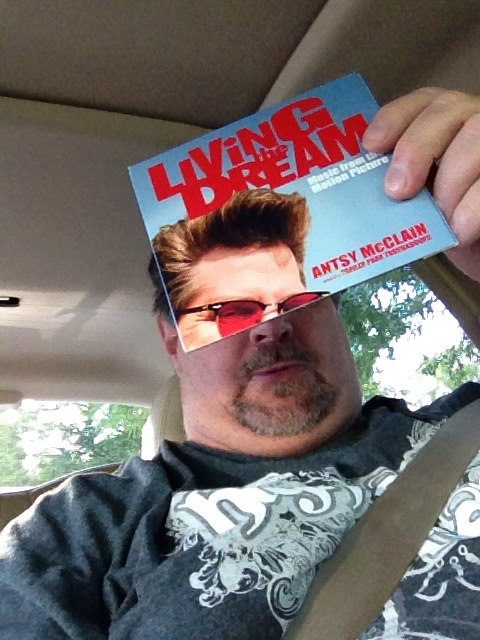 I have called this “Livin’ the Dream” as that is the best way for me to express what my current career situation is for me.  I have gone from nightmares to living the dream and doing what I am passionate about. 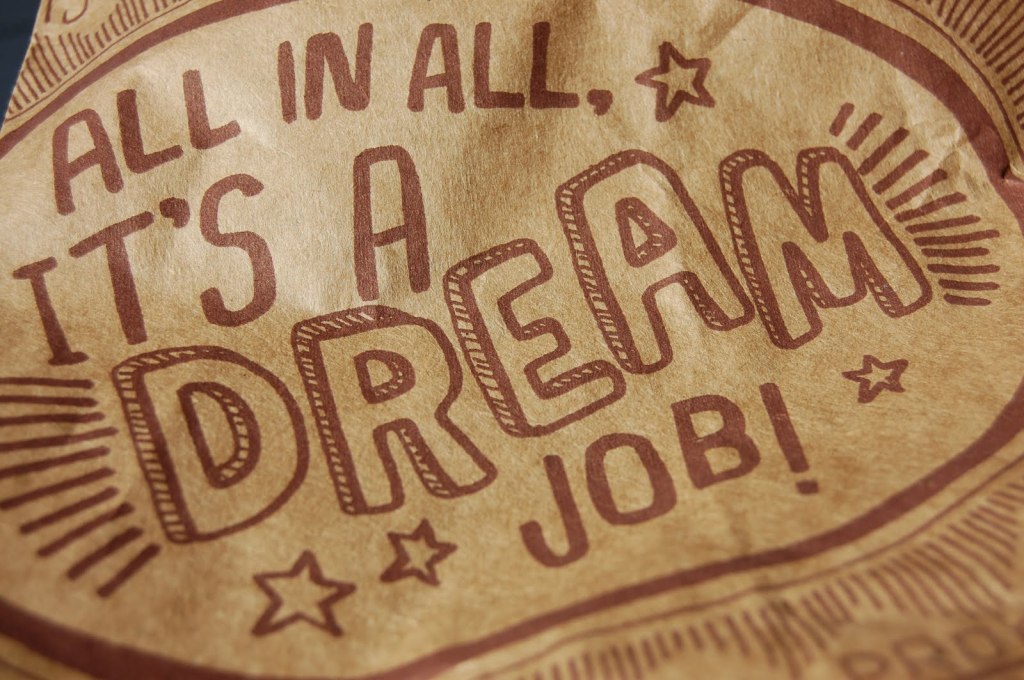 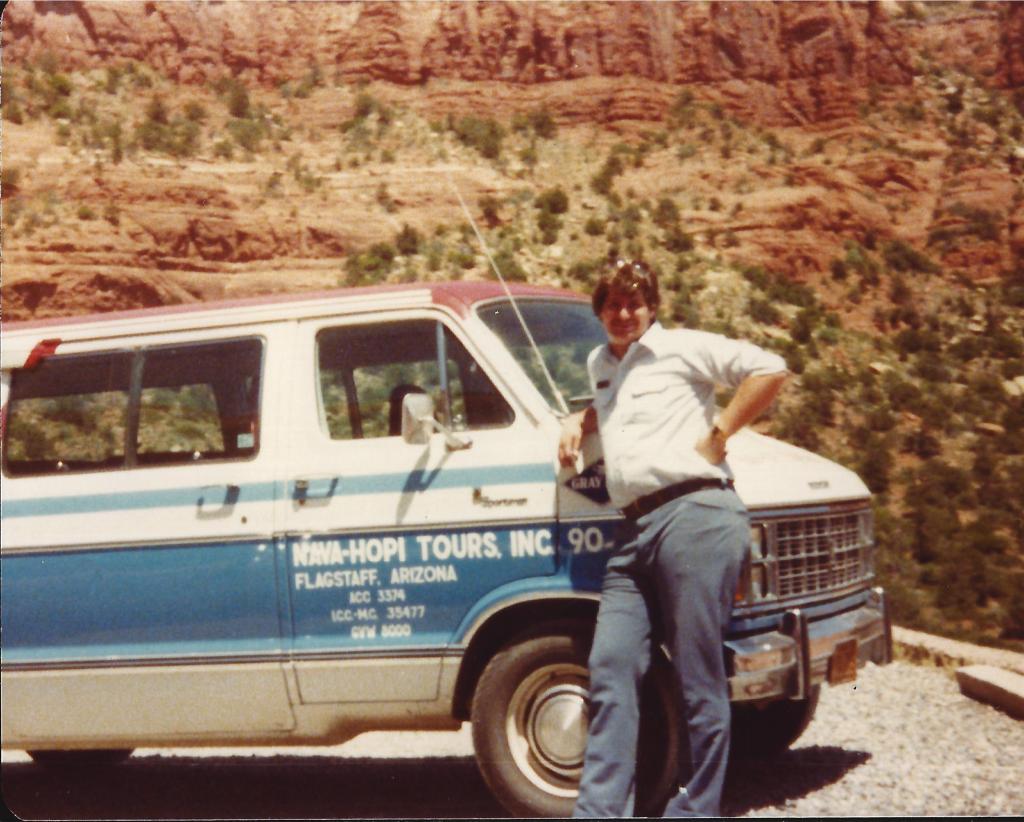 Over the years, I have had a number of dream jobs. Perhaps my first was working as a tour guide in Flagstaff, Arizona in the early 1980s.I drove vans and buses and took tourists all over the beautiful locations of northern Arizona to places like Sedona, Monument Valley, the Navajo and Hopi Indian reservations, the Petrified Forest, Sunset Crater, and many other fabulous locations including the Grand Canyon. I met wonderful people, saw beautiful scenery year around, and I truly had a great time. 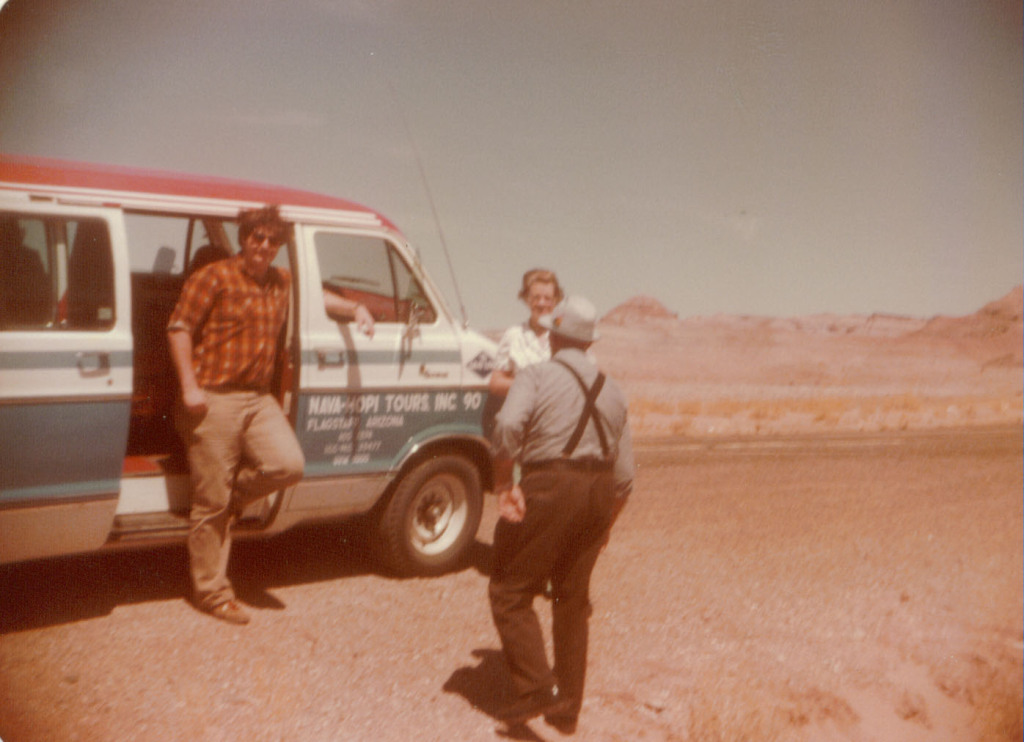 It was not until the late 1980s when we had an opportunity to go to Japan as a family that I was able to experience my next “Dream Job.” After graduation from Arizona State University with a Master’s Degree in Political Science/International Relations, I landed a position through the Japan Exchange and Teaching Program (JET Program) to work for the Oita Prefecture Government as a Coordinator for International Relations (CIR).  In fact, I was one of 32 Charter CIRs in the first year of the JET Program, which also brought nearly 500 Americans, Canadians and British to Japan to teach English.  This was my second “dream job” as I once again got to work with people from all walks of life from different parts of the world as they visited Oita and I got to travel, I did TV shows and had a wonderful two years on that gig (as well as an additional 2 years with Asahi Solar Corporation. My children were in TV commercials and all of these were a result of that particular position. 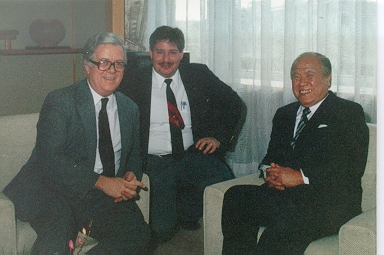 I served as interpreter, guide and host for then British Foreign Minister Sir Geoffrey Howe (L) and Oita’s Governor Morihikio Hiramatsu (R) in 1987 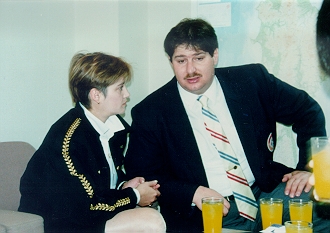 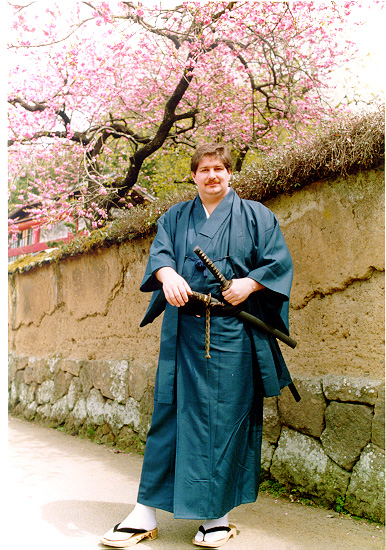 I did many TV shows while in Oita. This was in Bungo Taketa at a famous Samurai museum. I have the authentic swords used by the samurai as I presented a show (in Japanese) about this historical site. 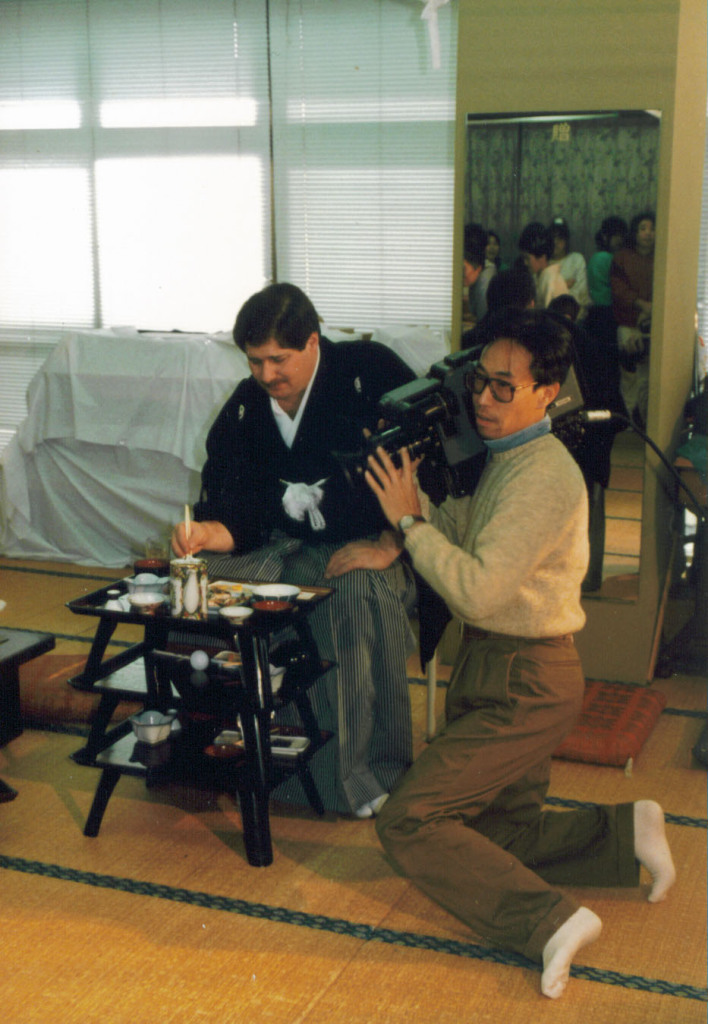 I was a co-host for a New Year’s Celebration program in Oita in Jan. 1989. Here I am with the camera man prepping fr the show.

Upon returning from Japan in 1991, I struggled to find gainful employment for quite a while and ended up doing a lot of Japanese translation work and other work related to my Japanese language skills. Though very skilled in Japanese, I believe that I went through a “burnout stage” because of all of what I was doing. Indeed, it was a Japanese-related position that brought the family to Kentucky in 1993. 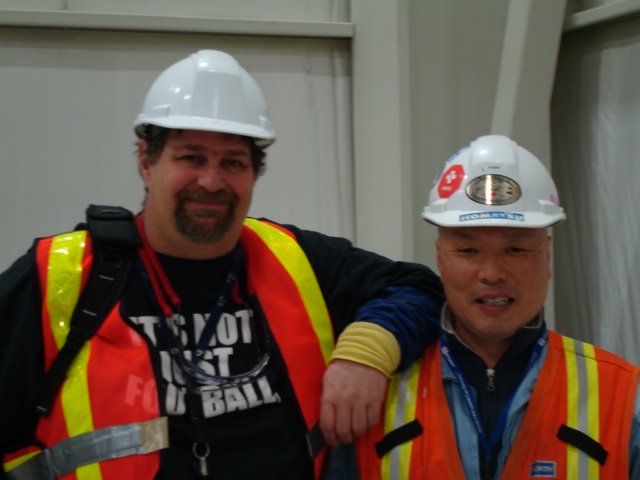 Japanese interpreting at the Toyota Plan in Woodstock, Ontario, Canada in 2008

Nevertheless, it was interesting to work in manufacturing plants such as the big Toyota plant in Georgetown, Kentucky (1997) and the Toyota plant in Woodstock, Ontario (2008). I worked in a number of parts manufacturers plants as well. Learning the manufacturing process was quite enlightening. In between a couple of those jobs, I worked on a Japanese-owned horse farm (which was beautiful) and I also spent a number of years working at Lexmark where I thrived on the job, but I would never call them “dream jobs.” The best part of the job at Lexmark was the opportunity I had to travel to Cebu in the Philippines (where I trained my eventual replacements!). 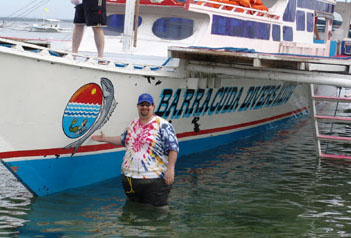 Island Hopping in the Philippines 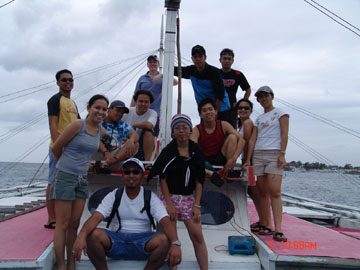 On a boat off of Mactan Island in the Philippines with “Team Higante”, the crew I was training in 2005

The trips to Cebu (which altogether totaled about 7 weeks) were definitely one of the best parts of the job. Despite the daily work routines, I spent many evenings and every weekend traveling around Cebu and other islands.  In fact, my first real trip journals (which lead to my travel blogging) were borne out of these trips (check out these early trip reports). Little did I know back then what my travel writing would do for me! 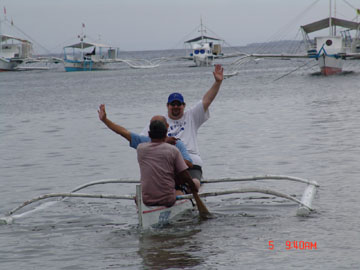 Sumoflam squeezed into an outrigger canoe on a small island north of Cebu. 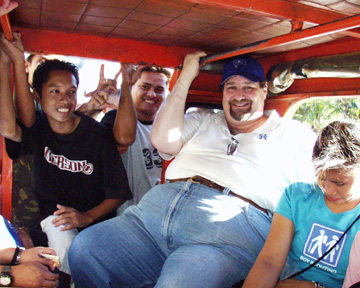 With friends in a Jeepney in Cebu

After Lexmark I did more Japanese work and eventually made my way to Ontario (which I noted above).  I really did not enjoy the translating work, but it brought income.  The best part was the travel to and from home every two weeks.  I took a different route each time, took lots of photos and wrote lots of trip journals (see them here). 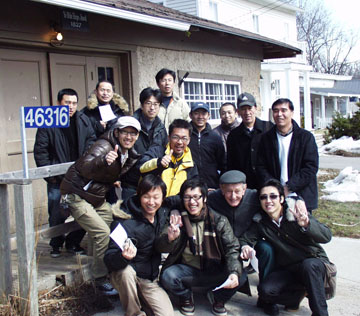 Japanese trainers in Sparta, Ontario on a Sumoflam led “tour” of Southern Ontario 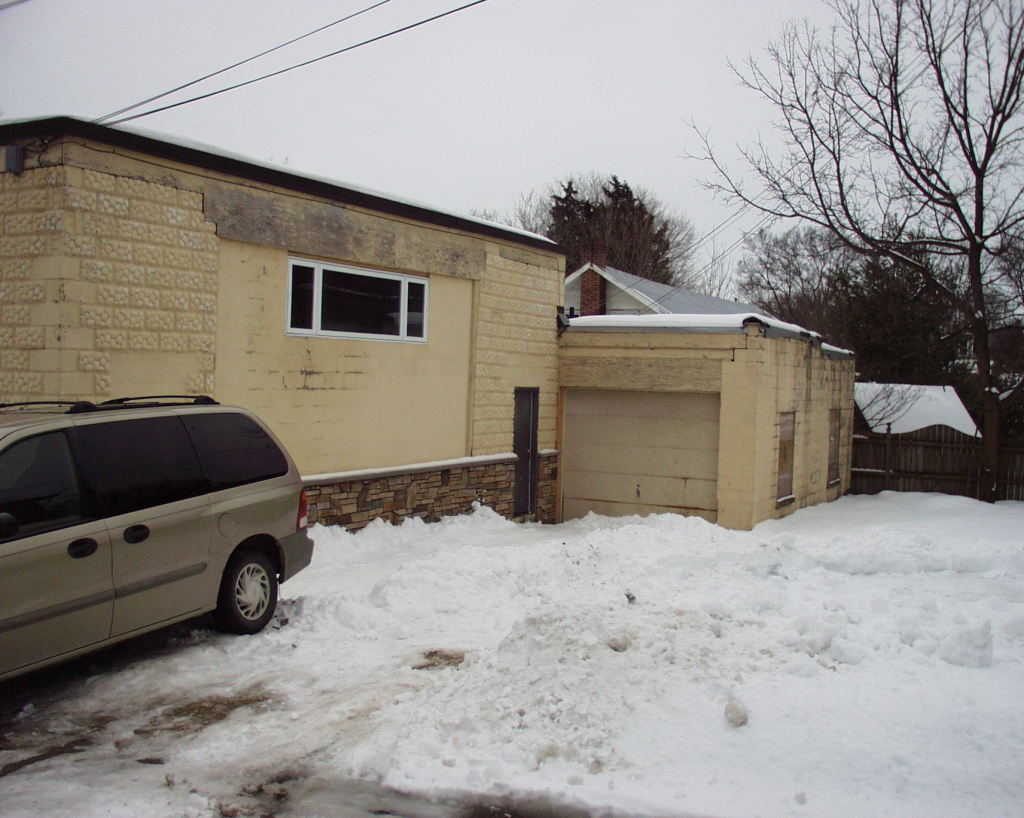 My little home away from home in Paris, Ontario in 2008

After my Ontario gig ended, I spent nine months in a job that was a literal hell for me.  I worked as a call center rep for Sprint, then Boost Mobile, then Apple.  I hated the jobs…low paying, low morale and no challenge.  I sought for opportunities to leave at every corner.  And, then in 2009 it finally happened. 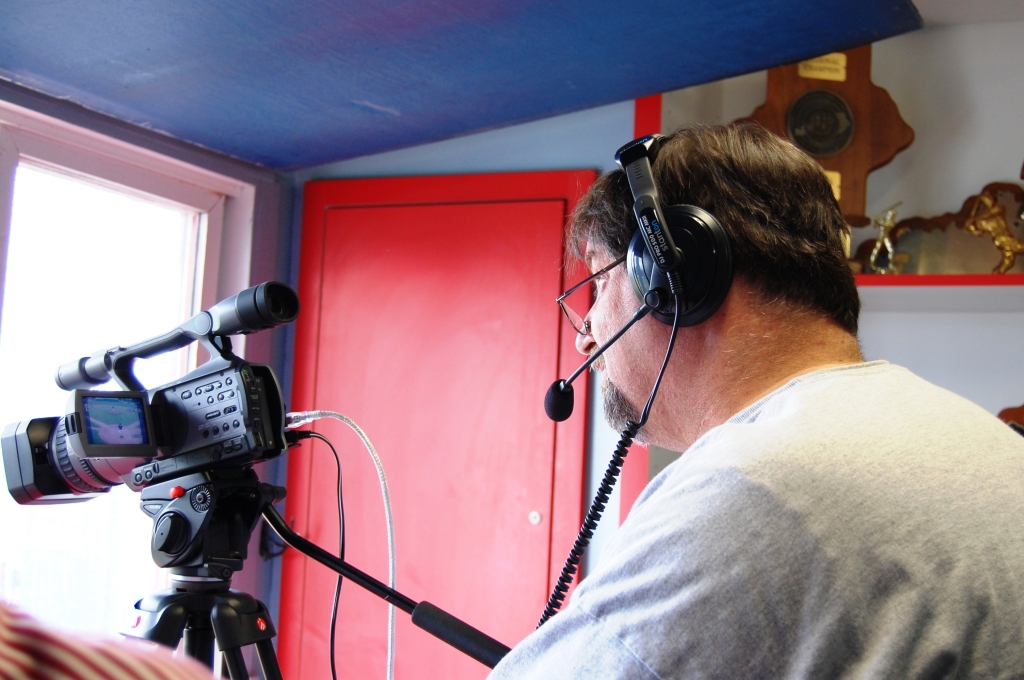 Working a baseball game for iHigh.com

My next real “dream job” evolved from being hired by iHigh.com in 2009. I have always enjoyed working in web design and web related services. I have also always enjoyed working with people. And, furthermore, I have loved working in things related to sports, especially high school sports. As a result, my position became one of great passion and enjoyment. Indeed, I did not even take a vacation for almost 3 years. My job was practically a vacation.The job also included a great deal of travel and meeting with people at high schools around the country. I got to do broadcast work which I enjoyed immensely. 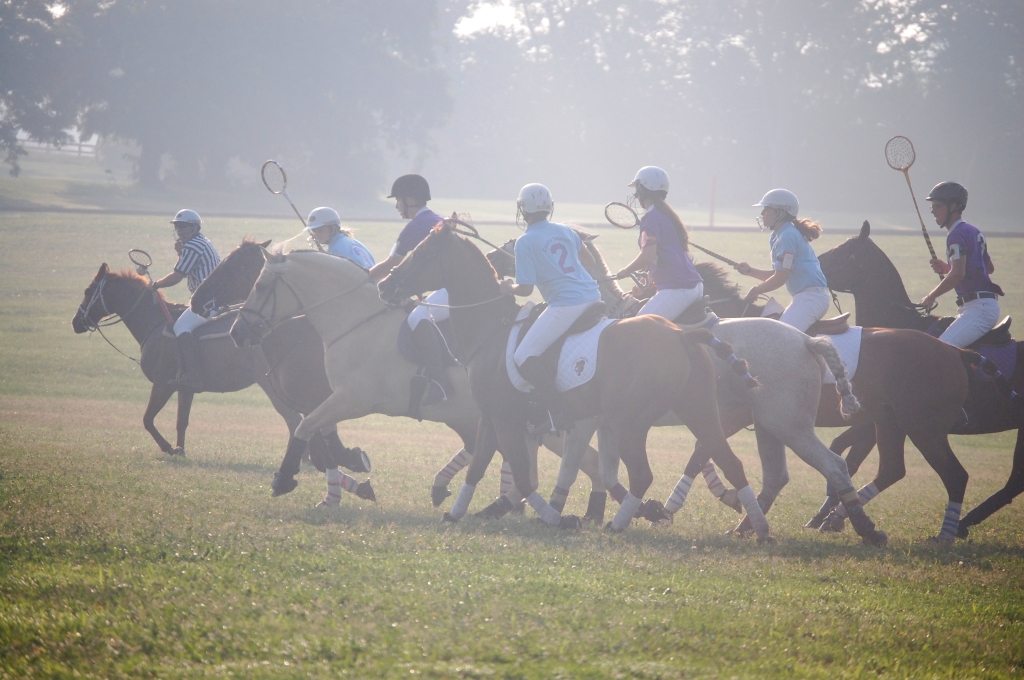 Polo Cross at the Kentucky Horse Park – we broadcast a number of Pony Club events. Was great fun. 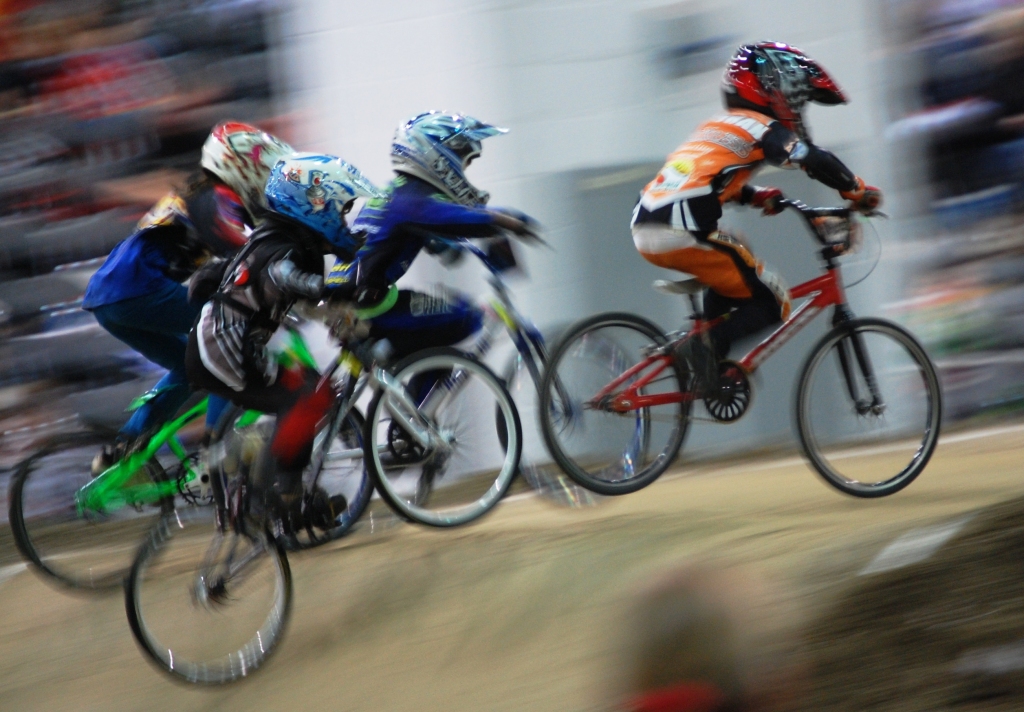 I traveled to many locations to broadcast BMX Races and took many photos, like this one. 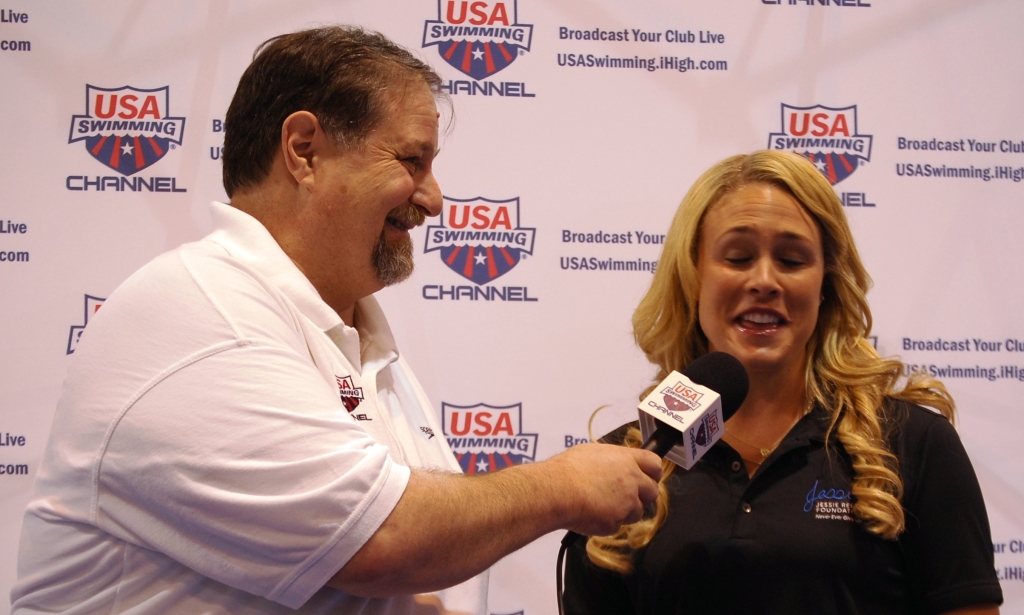 As part of my iHigh work I was responsible for the USA Swimming partnership and got to attend the Olympic Trials and broadcast some events. I a interviewing multi medalist Kaitlin Sandeno 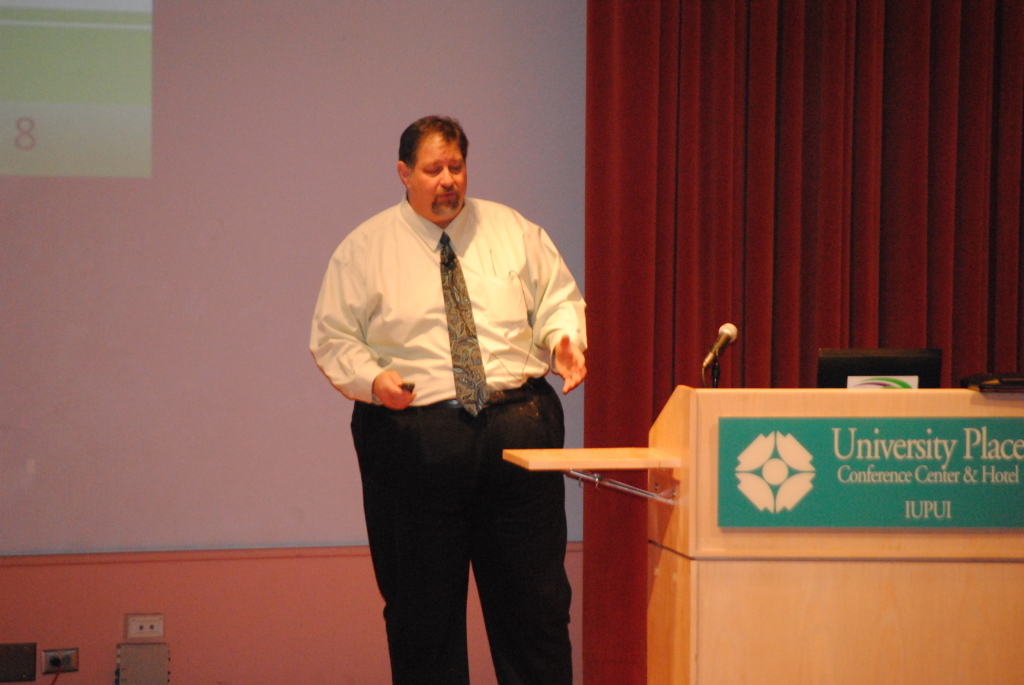 That dream job came to an abrupt end on November 2, 2012. At that time the company had made some major decisions in the business direction and the shifts left both my wife and myself unemployed as we did not fit into the new program.I was devastated as my “dream job” had fallen out from underneath me. 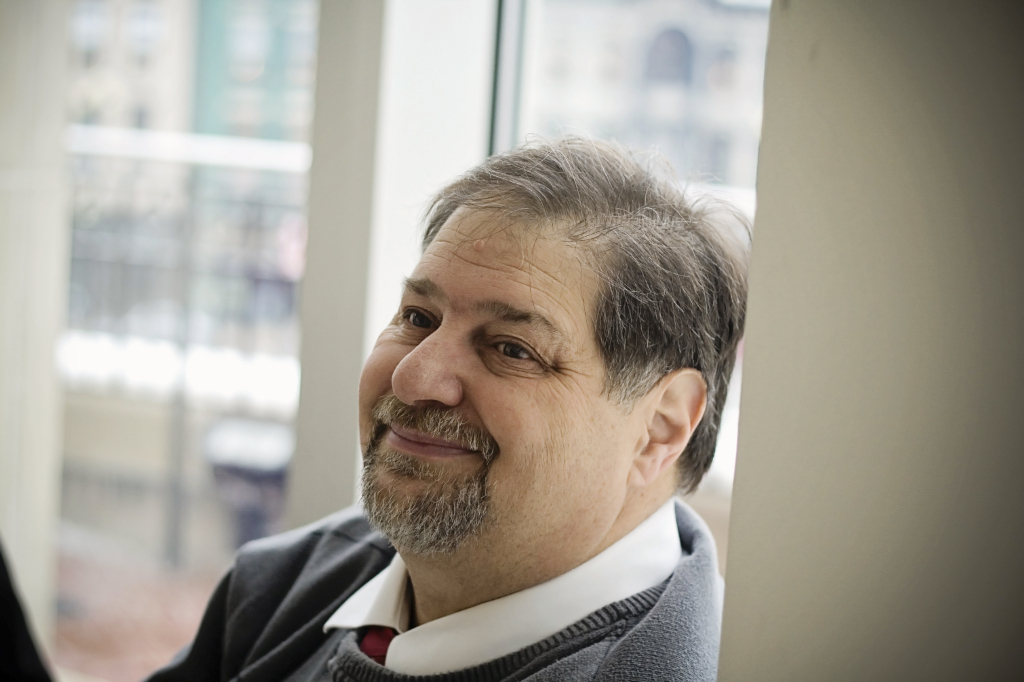 Had to Ponder the Future

From the time I lost that position in 2012 through 2013 I struggled again to find any full-time employment. And that is where my previous post begins and how I have participated in the “reinvention of myself” and my skill sets. 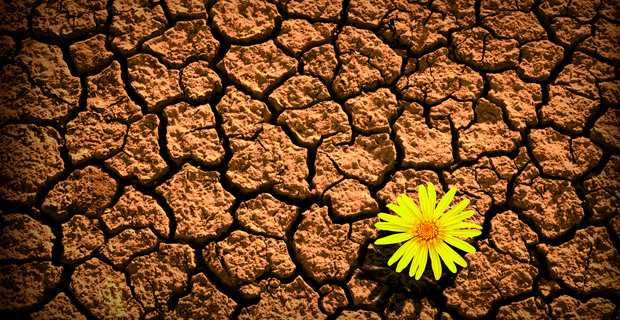 I like to think of myself as being resilient. I have learned to adapt to change and always try to take a positive angle towards it despite any challenges, frustrations, hurdles, etc.I also make a great effort to not burn bridges along the way and to do a good job wherever I am up until the last day.

So, this reinvention of myself and my skill sets led me to learn the WordPress CMS through my travel blog and then through this blog and others. Relations that I had created such as those at VYPE.com brought me work and I was able to continue to build on the foundation that I had learned through my blog. With VYPE.com I worked with a developer and helped build the entire network after VYPE left iHigh and had to build their own network.and now, for over a year, I have worked with them and manage their entire Web structure which is all based on the WordPress platform. Through them I picked up other work and through other connections I picked up even more work to where I now have number of clients and I was working from home. I was doing things that I enjoy as putting together websites is just a form of creativity that I seem to thrive at. 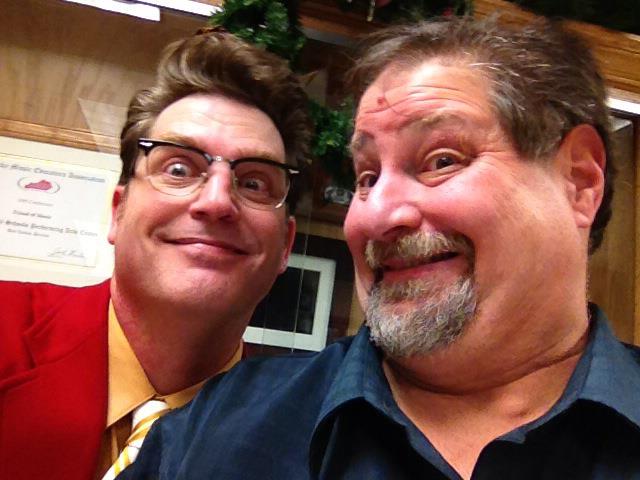 With the freedom of working from home, I have reestablished the management of a number of websites I had done in the past. One of these was moving my good friend and well-known singer/songwriter/recording artist/graphic artist Antsy McClain’s website into the WordPress platform.  I once again manage this for him and work closely in his promotion. Indeed, this has been part of “Living the Dream” as I remain in the music industry, something I had dreamed about as a high school student. 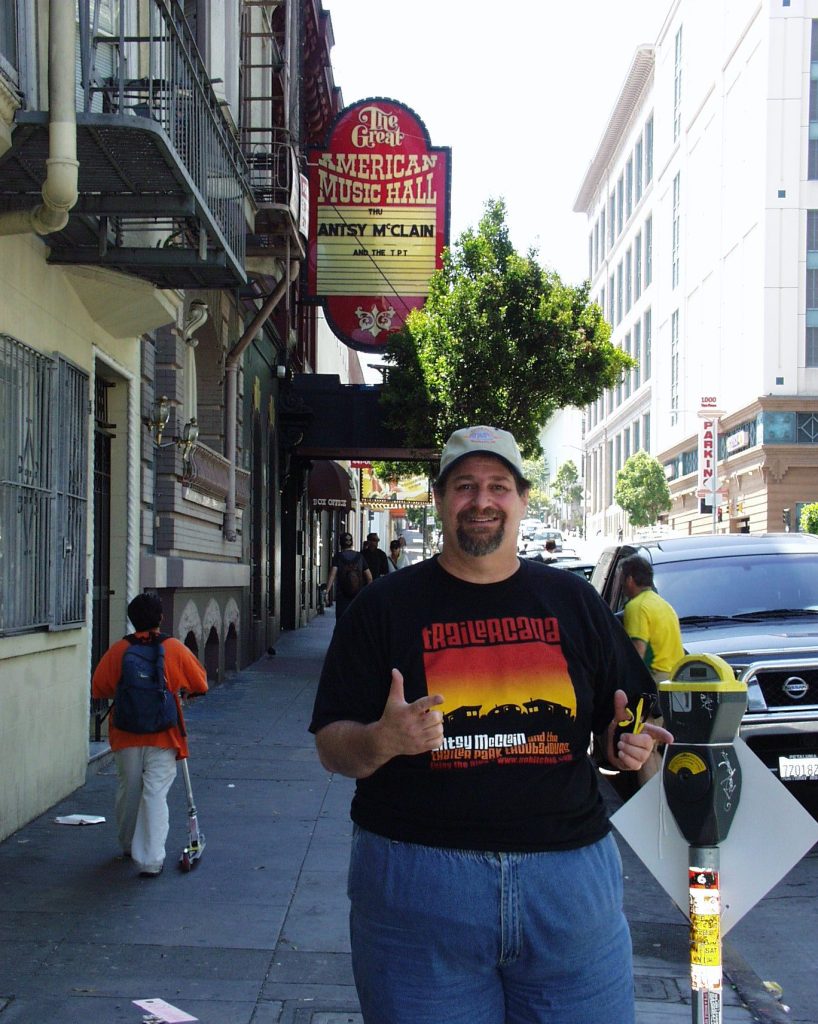 Then, in early September I got “The Call.” I had been doing some work with my former boss at iHigh.com who now runs a multimedia company called BlueMillion.com. Blue Million is a digital technology and marketing company specializing in social media, digital marketing, and live video to online and mobile audiences around the world. Through this work, he called me from the offices of iHigh, Inc., which runs the Great American Rivalry Series. 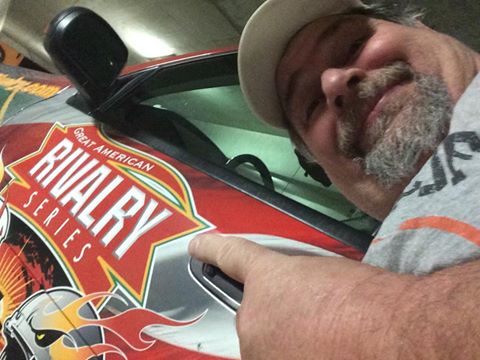 This company used to be a sister company of iHigh.com, but recently split away as iHigh.com moved to VolarVideo. I was asked to use my web skills and social media skills to be their “Control Central” during football season. This has literally brought me full circle as I am now working out of the old iHigh Office on Mondays and Fridays and then from home during the week.  Like the days of iHigh, I watch and monitor high school football from the office on Friday nights.  I get to work with many of the high school coaches and broadcast organizations of the past as well. I count this both as an immense blessing and a recognition for my devoted hard work ethic. 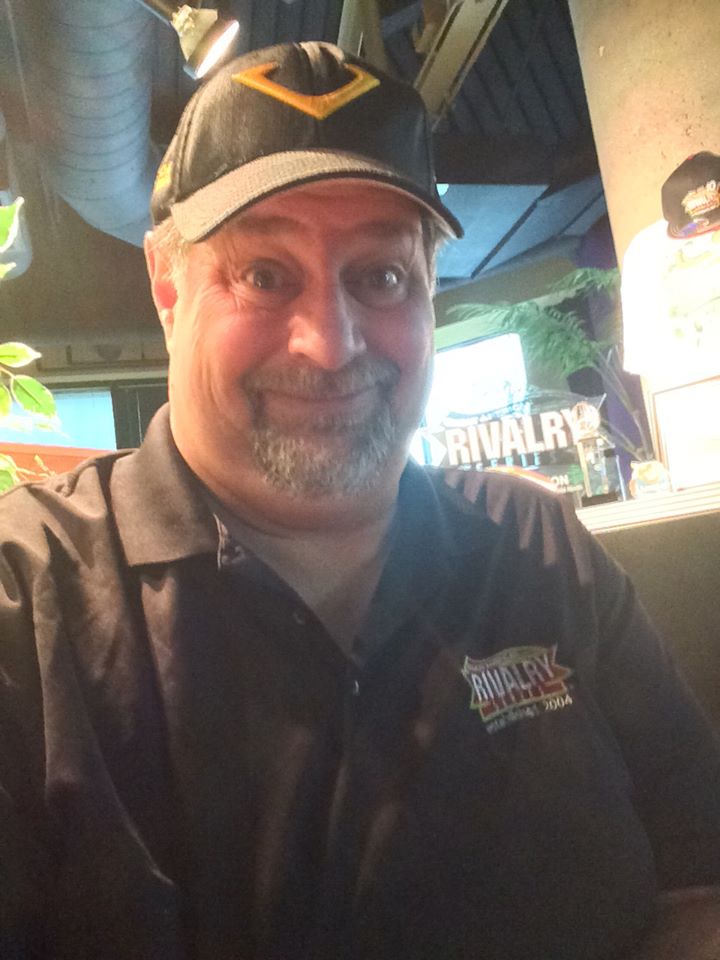 Wearing two hats (OK, a hat and a shirt) as I am full swing into high school sports again.

Coupled with this, I have partnered with Fieldhouse Media Group as their Web Manager (and as an extension I am the Digital Media Coordinator for VYPE.com, part of FMG now). I work with many wonderful people. As a result of this work, I am once again working with a number of broadcast groups across the country and am able to bring them on to the VYPE network as partners. 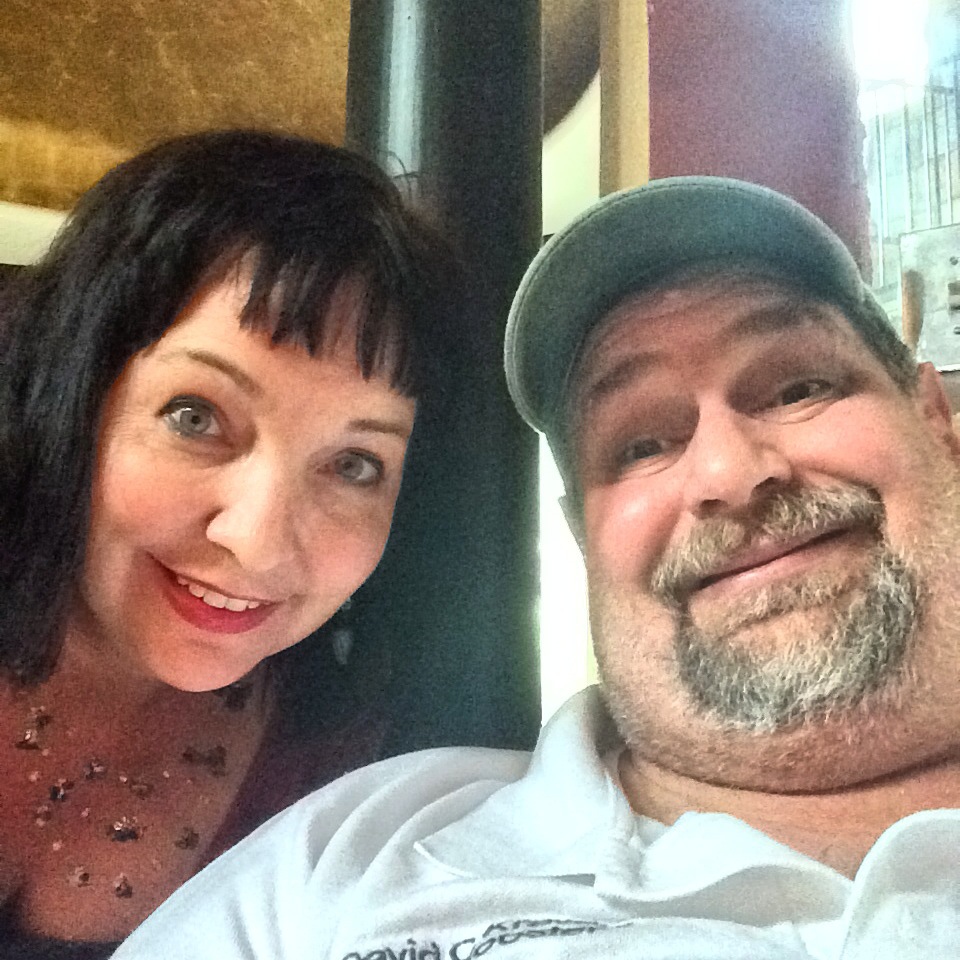 Another wonderful “dream fulfiller” which originated with my blog writing was “meeting” other bloggers, photographers and writers. They have all inspired me in so many ways that I will continue to “reinvent” myself and move towards writing some books about travel the back roads of America…an extension of my blog. (Shown above is Tui Snider, author of two books recently and blogs at Mental Mosaic).

A couple of others that have become an inspiration: 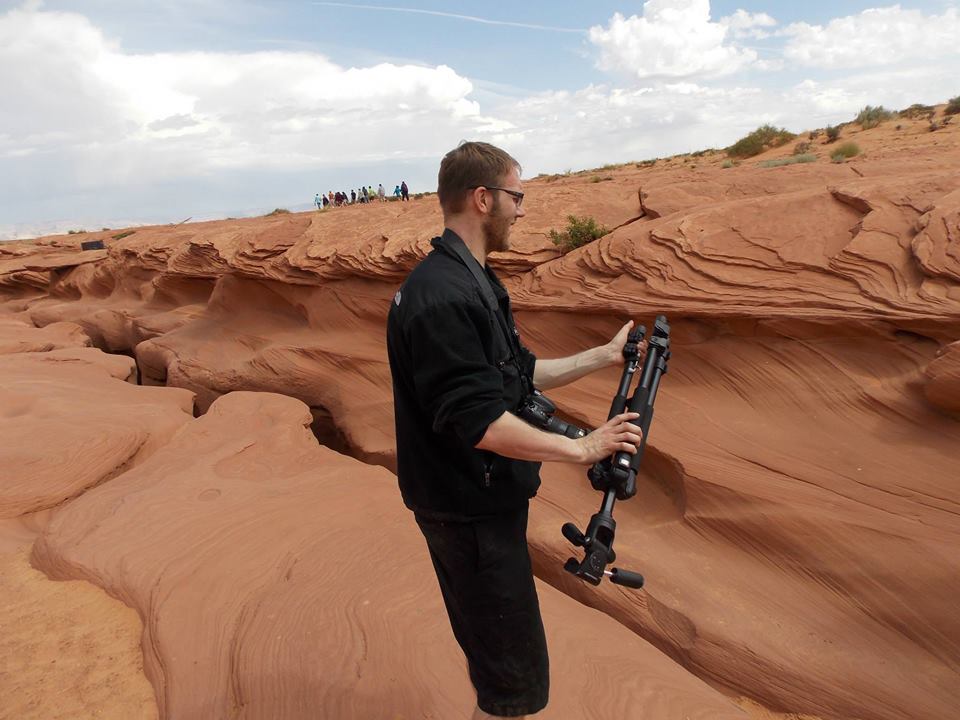 Derek Ace, a professional photographer…does amazing work. We met at Hells Half Acre in Wyoming in May 2014 (See some of his work on Facebook)

The Dream Job is here and better than ever. Its not about the money, its about the doing what you enjoy and excel at. I now have a photo blog, a photo site on National Geographic and have become a member of the Professional Travel Bloggers Association  Life is Good! 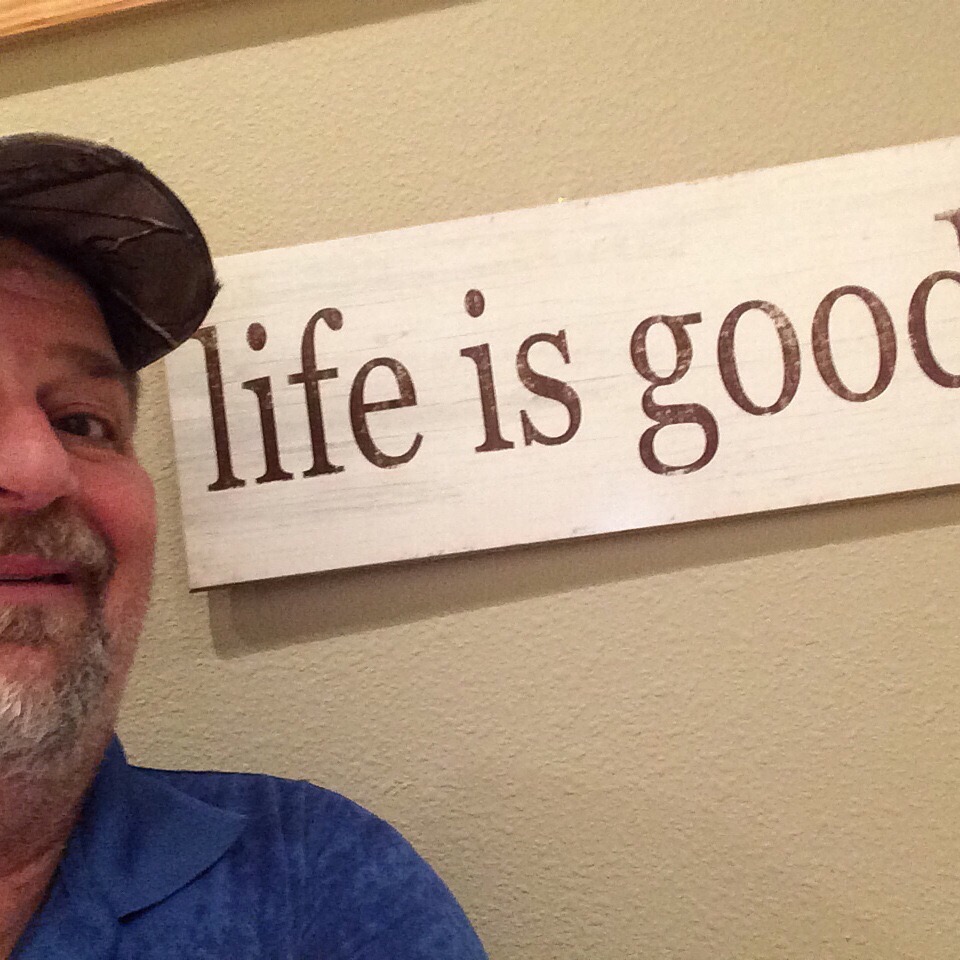