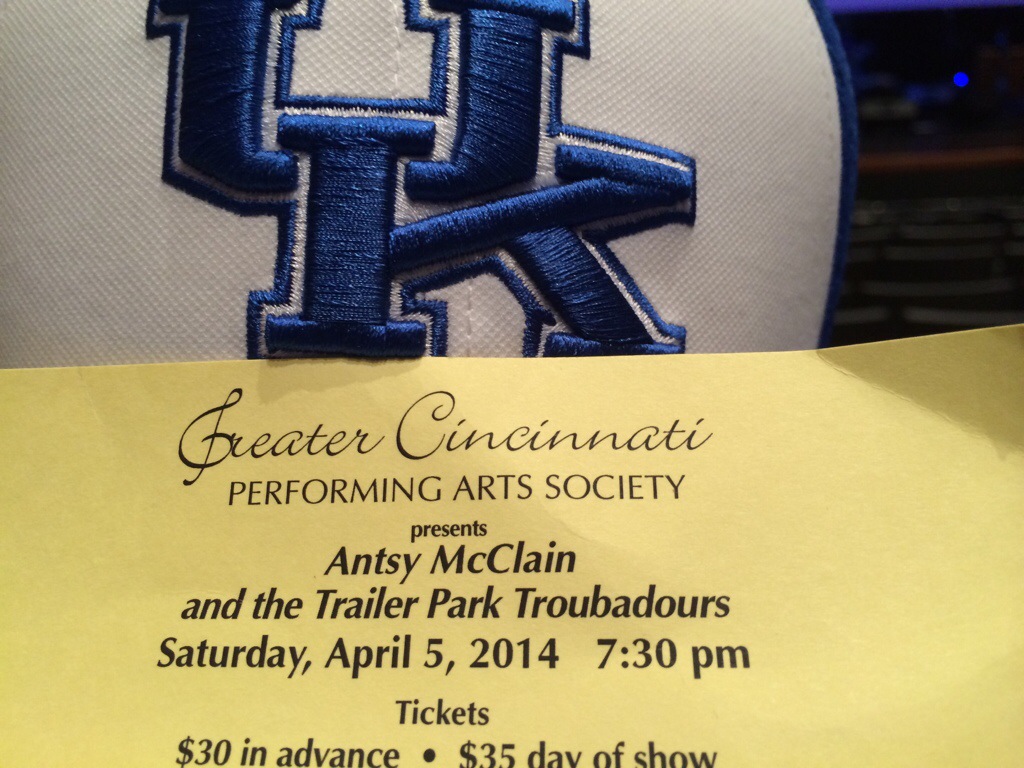 This is a true story of unusual events that happened on April 5, 2014. I take no real meaning from it, but there were notable coincidences that make for a fun story. Indeed, Synchronicity was there.

Synchronicity is the experience of two or more events as meaningfully related, where they are unlikely to be causally related. The subject sees it as a meaningful coincidence. The concept of synchronicity was first described by Carl Jung, a Swiss psychologist, in the 1920s. I find synchronicity daily as I say words that happen to be said at the same time on the radio…happens ALL the time!!

Jung believed that many experiences that are coincidences due to chance in terms of causality suggested the manifestation of parallel events or circumstances in terms of meaning, reflecting this governing dynamic.

Before I tell about this synchronicity, I feel I should provide a few pieces of background about all this.

1. I have cheered on Kentucky basketball for many years, but have not really ever been a true “blue-blooded” fan. Rather, I have been more of a BYU fan for various reasons.

2. I first met Antsy McClain in 1993. We worked side by side in Shelbyville, KY at a Japanese auto parts manufacturer as Japanese interpreters.

3. I am not originally from Kentucky, but my step mother had ancestral roots here, which I later learned after doing genealogy upon arrival in Kentucky.

4. All of my children graduated high school in Kentucky.

5. I have two children that graduated from UK.

6. My college professor/mentor at Arizona State University graduated from UK.

7. My wife recently was hired to a position at UK

9. I have worked and, at times, traveled with Antsy McClain and his music interests in varying capacities over the past 20 years.

10. My real passions in life are travel, music (especially Antsy McClain) and my grandchildren. I love sports as well, but they rank lower on the “passion scale.” 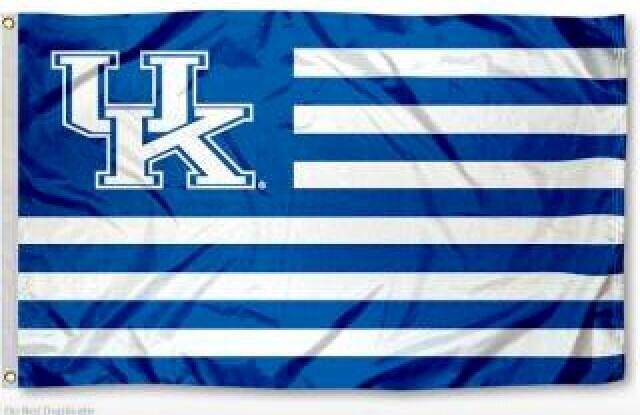 These things being said, I do get excited when UK gets into the Sweet Sixteen and, like the majority of Lexingtonians, I do get caught up in March Madness. (For an example of how “Mad” and “Crazy”, see this article on Couch Burning in Lexington). Indeed, I was really excited to see that UK would play in the final four beginning on April 5. 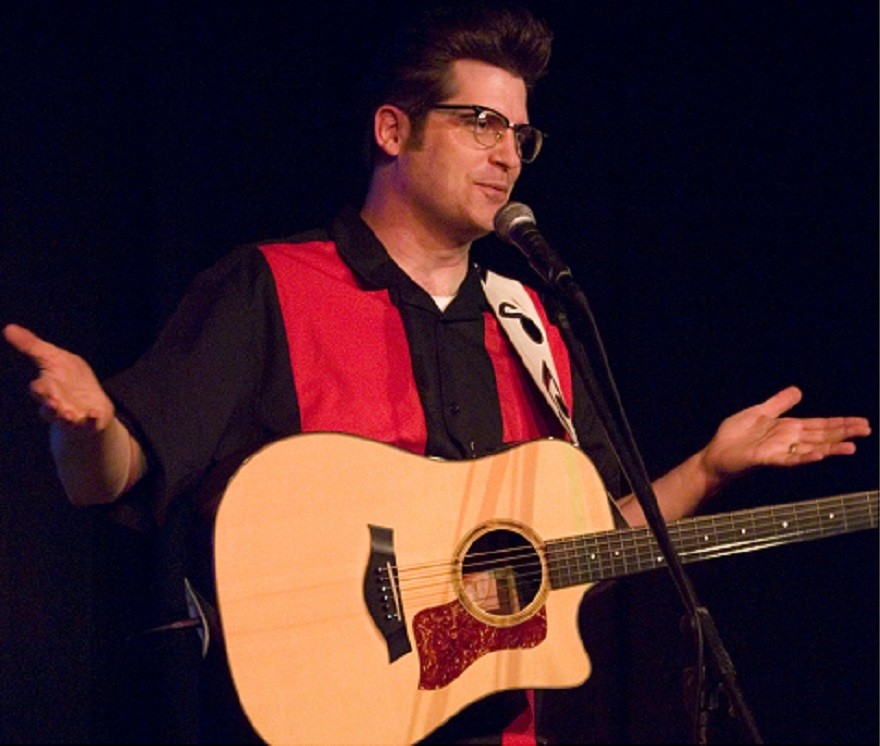 However, on April 5 I had other plans. For a few months I have been planning to go to the Cincinnati area to see Antsy McClain performing a concert with a band comprised of some other individuals I know well (Pauly Zarb and Pat Kirtley). 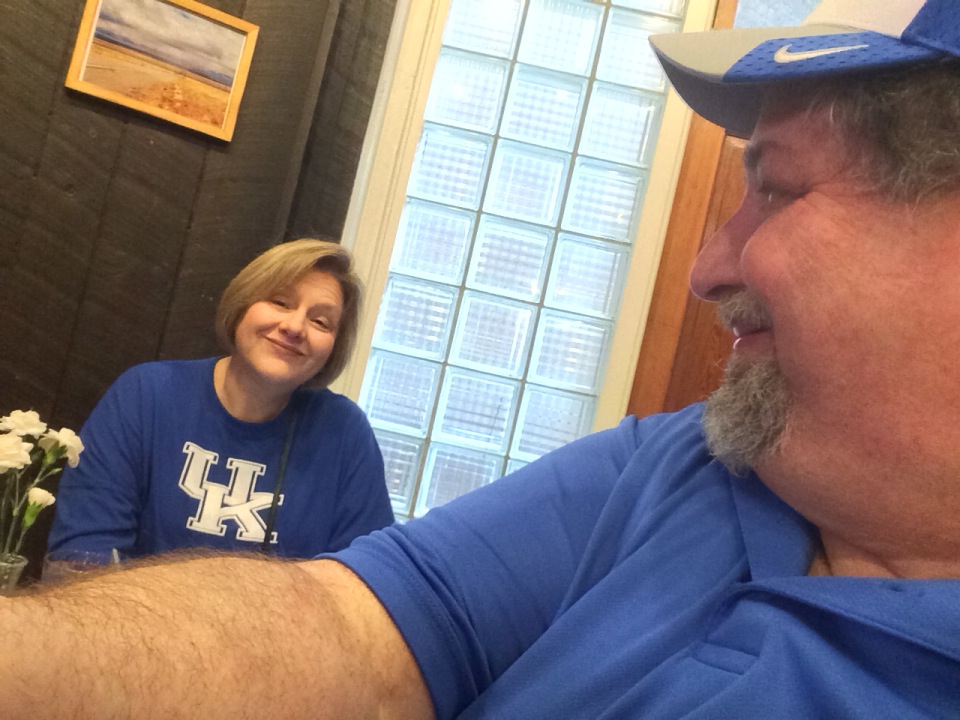 So on Saturday morning my wife and I ventured to Cincinnati, had a good time seeing if you sites and then headed northwest to the small town of Harrison, Ohio to see Antsy and the Trailer Park Troubadours perform at the Martin Marietta Center at Harrison High School. But, I did as any real UK fan would do, I wore a UK hat and UK shirt to the show to promote my support for them in the final four against Wisconsin. 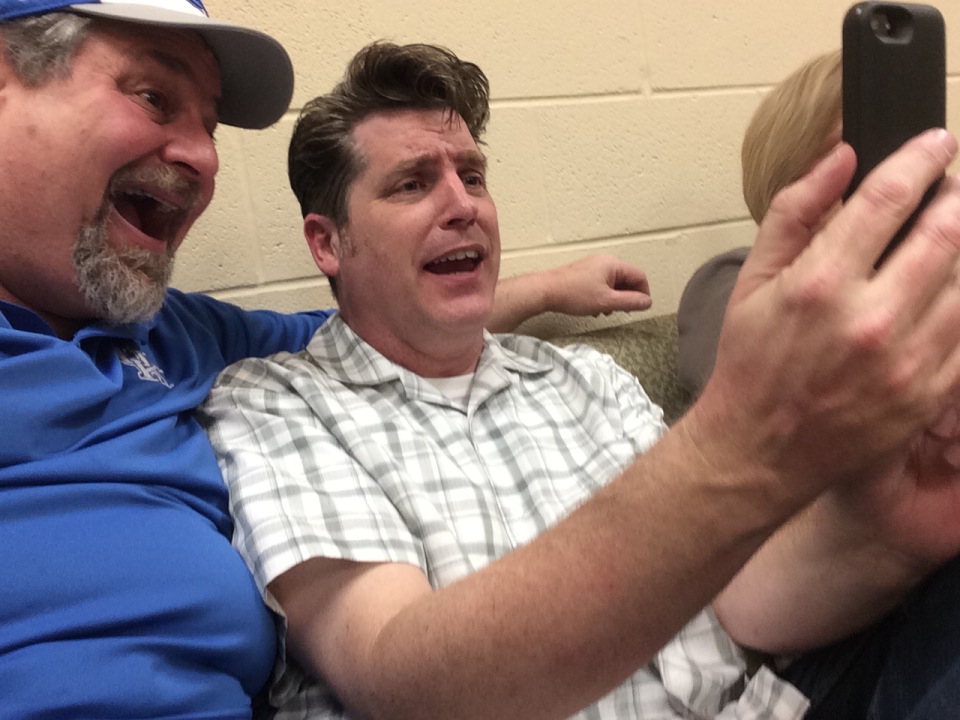 Hanging with Antsy before the show, in my UK gear

Upon arrival, there were a few people that noticed my UK outfit and asked if I was not at the wrong venue? Of course, I am more of a Pink Blooded (as in Flamingohead) Antsy fan. And my opportunities to see my close friend perform are few and far between. 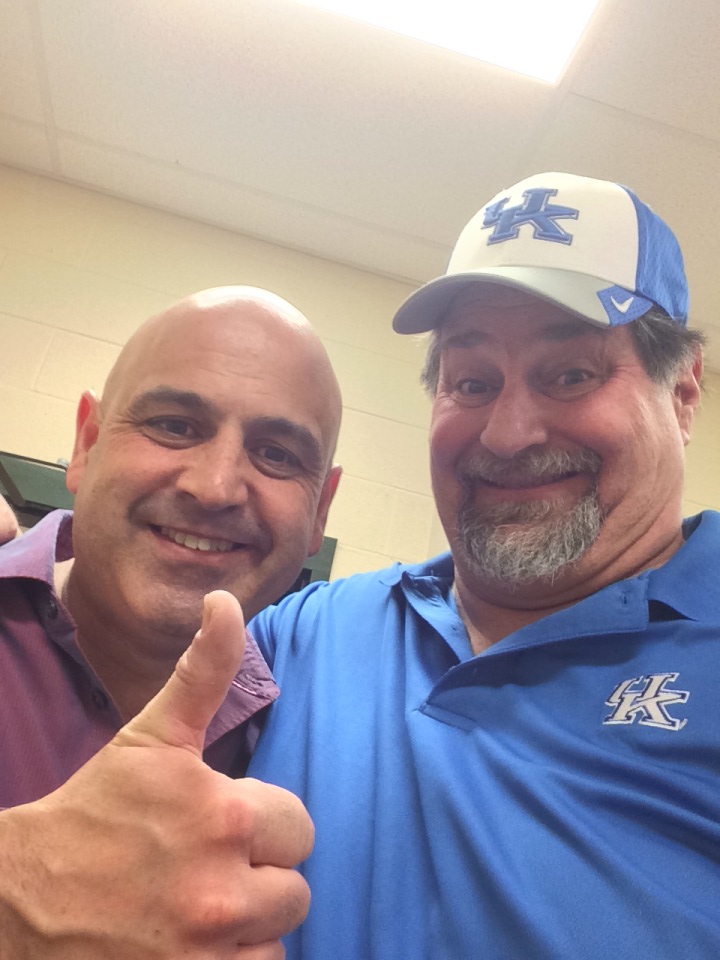 So, with iPhone (and an ESPN app) in hand, we visited with Antsy, Pauly Zarb ( an Australian musician who has performed with Antsy for many years, a former resident of Bardstown and a big UK fan), Chris “Spoonz” Long, the drummer (and a UK fan) and amazing guitarist Pat Kirtley (also from Bardstown and a UK fan). After that we enjoyed a great show ( and monitored the score of the UK/Wisconsin game, which went back and forth). 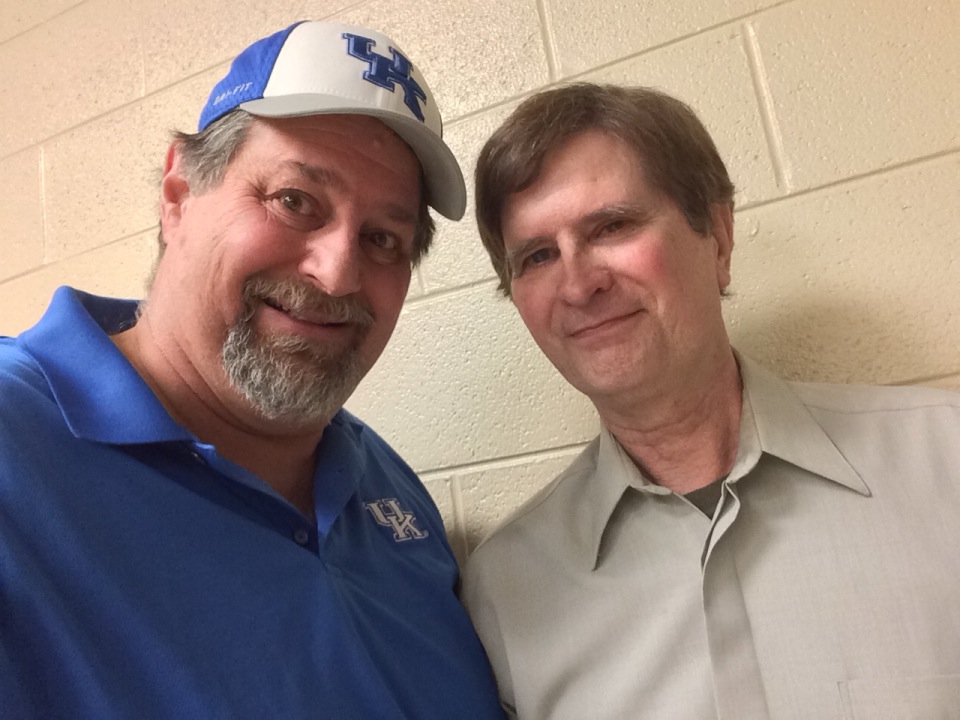 The show was fabulous and ended while there was still three minutes left in the UK/Wisconsin game. We hurriedly said our goodbyes to everyone in the green room. Pauly already had the TV turned on to the game. 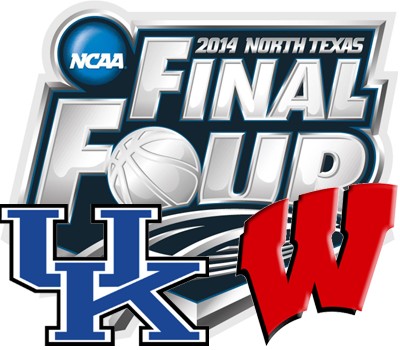 Julianne and I hustled out to the car and watched the last three minutes in the Harrison High School parking lot. It was so exciting. And with 7 seconds left UK Freshman Aaron Harrison knocked out a three pointer to gain the lead. They stopped Wisconsin on the other end to win and advance to the championship. 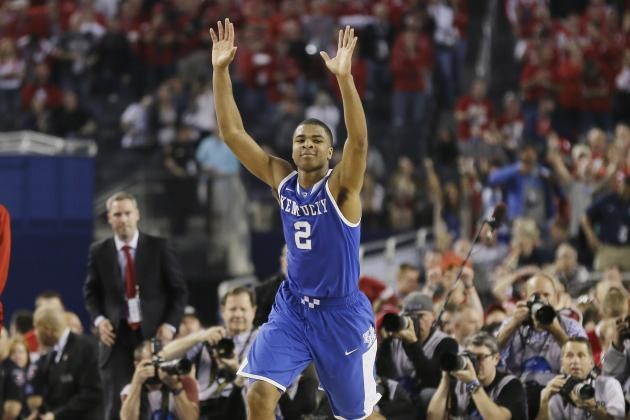 Aaron Harrison after scoring the three to drop Wisconsin

It struck me as funny that we were in Harrison, OH and in the Harrison High School parking lot watching Harrison drain a 3 for the win!! Synchronicity!! 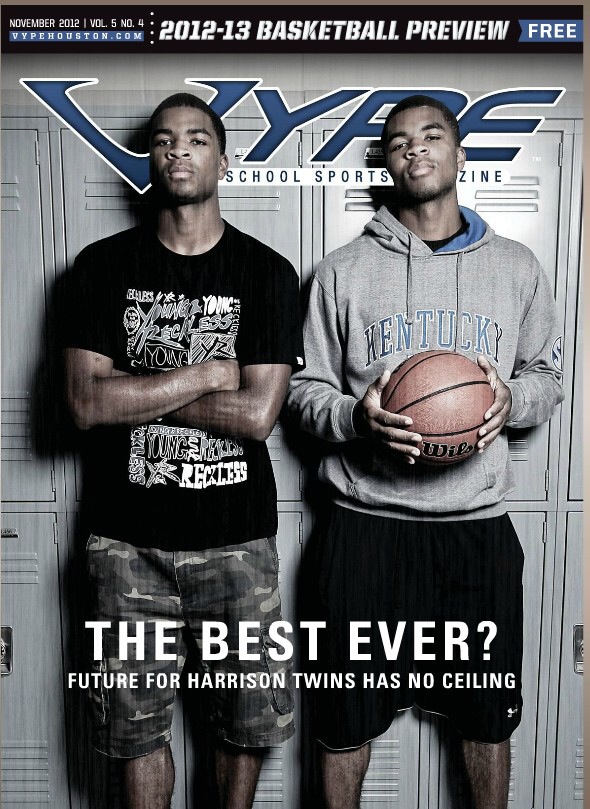 Harrison Twins on cover of VYPE Magazine in November 2012

But the story doesn’t end there. Aaron and his twin brother Andrew were recruited by UK from a high school in Houston. Back in November 2012 they were featured on the cover of VYPE magazine in Houston. I knew this because I manage the websites for VYPE.com and work closely with the Houston group. With the last 3 games the Harrisons have been key to getting the wins. In fact, Aaron Harrison has drained a game winning shot in each of the games. More Synchronicity!! 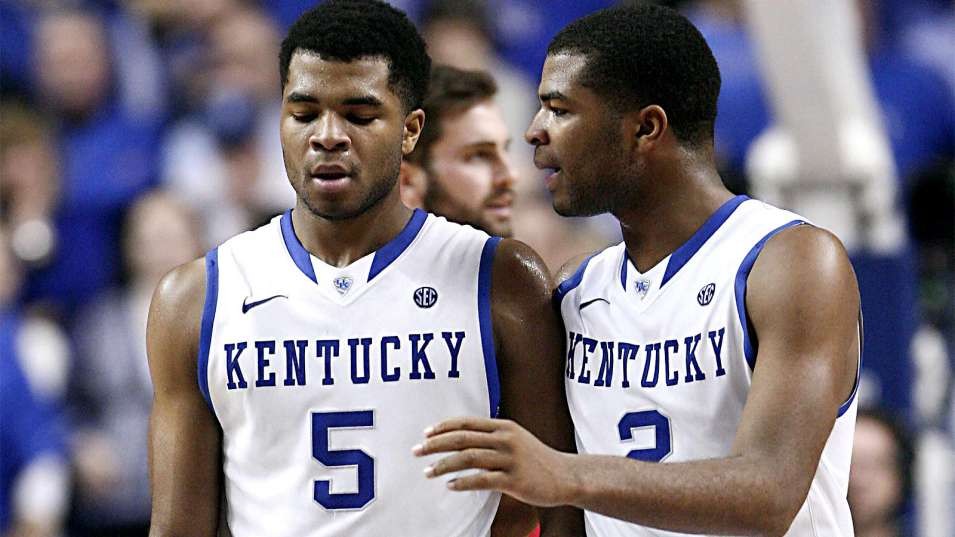 So, all of this was melded in the Harrison High School parking lot…Antsy from UK in Harrison while we wore our UK gear and seeing Harrison, who I knew from VYPE, shoot a real game winner! So exciting. 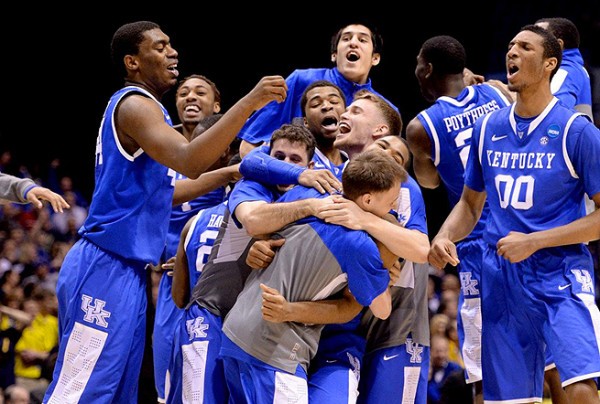 UK Celebrates after victory over Wisconsin in final seconds

Then, there is the final fun irony….my son Seth lives in Connecticut and now has the opportunity to wear his UK gear to work in the midst of all these Connecticut folks. 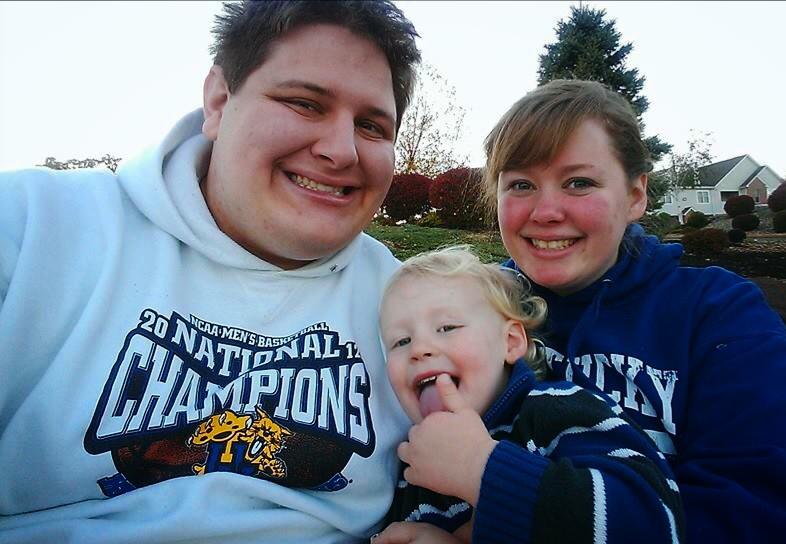 My son Seth and his wife Holly decked out in UK gear.

Julianne and I are caught up in the madness and look forward to watching the UK / UConn championship game tonight!!  In fact, for today I have even changed my Sumoflam logo…. 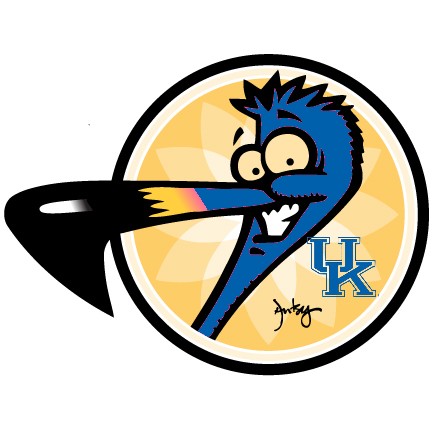 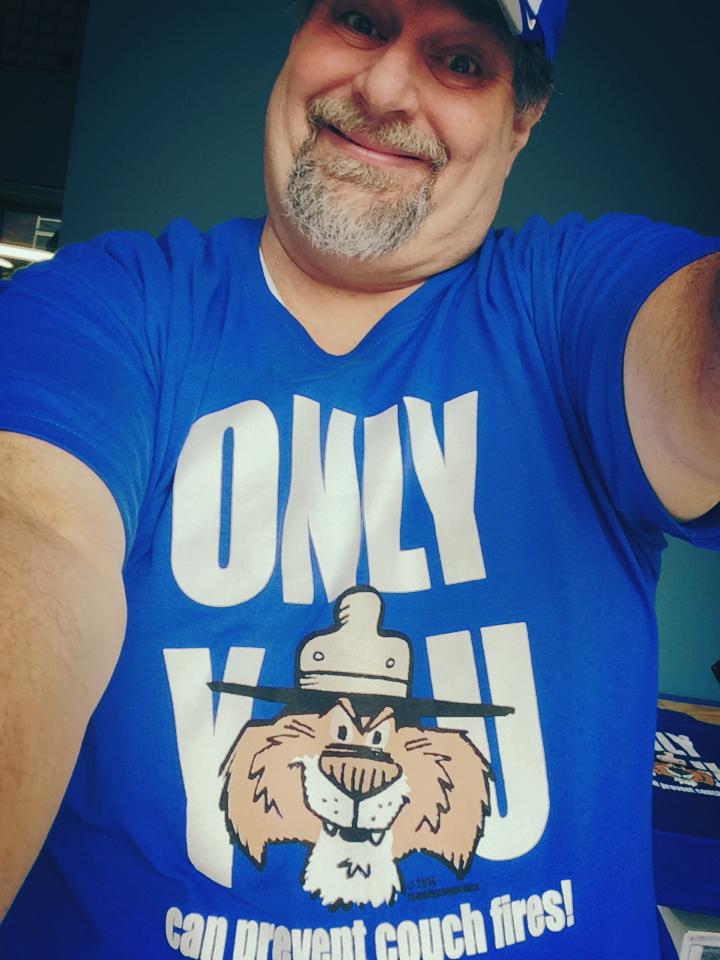 Only YOU can prevent couch fires