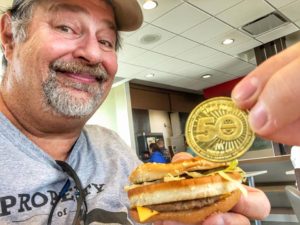 I am a sucker for Pop Culture kitsch.  So, today McDonald’s kicked off the 50th Anniversary Celebration for the Big Mac by giving out commemorative coins when you order a Big Mac (while supplies last, of course). Being the Pop Culture lover that I am, we went for it.

I remember well when the Big Mac was introduced with the catchy song that said “Two all beef patties, special sauce, lettuce, cheese, pickles, onions on a sesame seed bun.”  I can still rattle that off after 50 years!

Well, I learned from the web announcements that only 6.9 million coins were to be given out in over 14,000 locations. The coins can be collected or, alternatively, can be used one time between now and the end of the year to get a free big Mac. 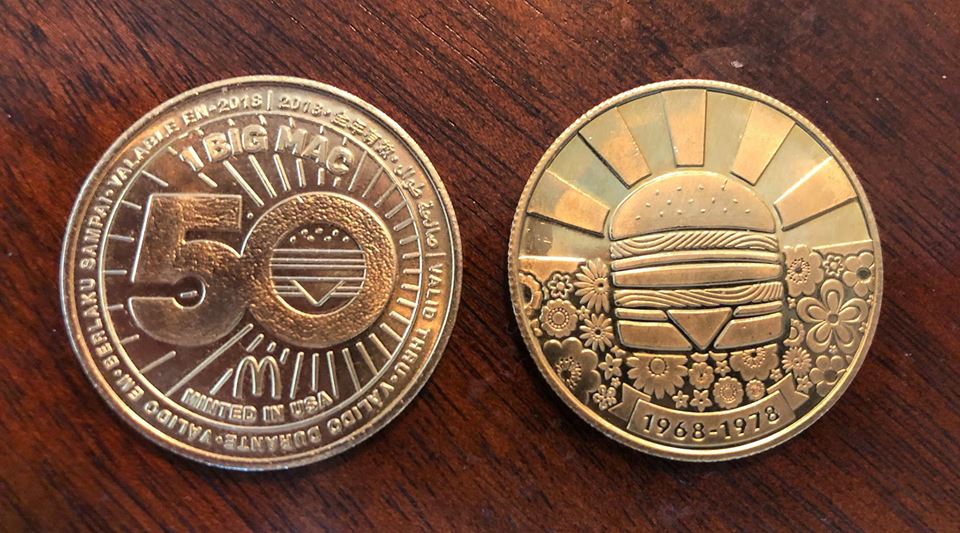 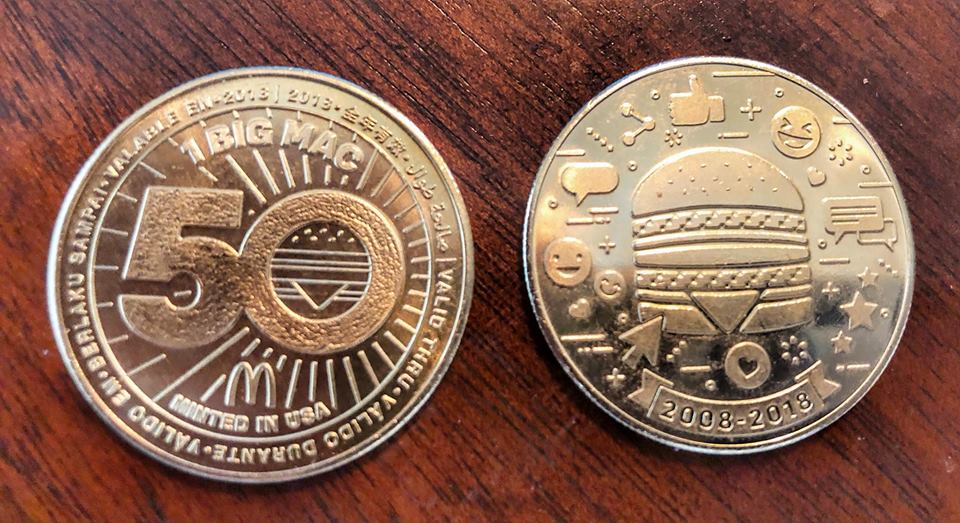 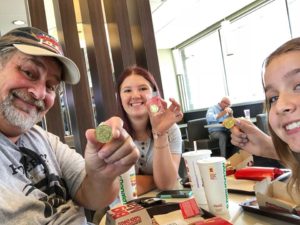 There are five coins representing each decade from 1968 to 2018 and the idea is to collect all five coins. It was supposed to be such that when you go to McDonald’s and order a Big Mac that you get a free coin. I went with Autumn first thing this morning (after 10:30 when lunch starts) and ordered two big Macs and they told me only one coin per order. (The ads specifically said “Buy a Big Mac, get a Free Coin.”) We later went to another McDonald’s and they told me they’re given out for EACH Big Mac and they gave a coin for each one ordered, even if they had to make separate orders at the time. 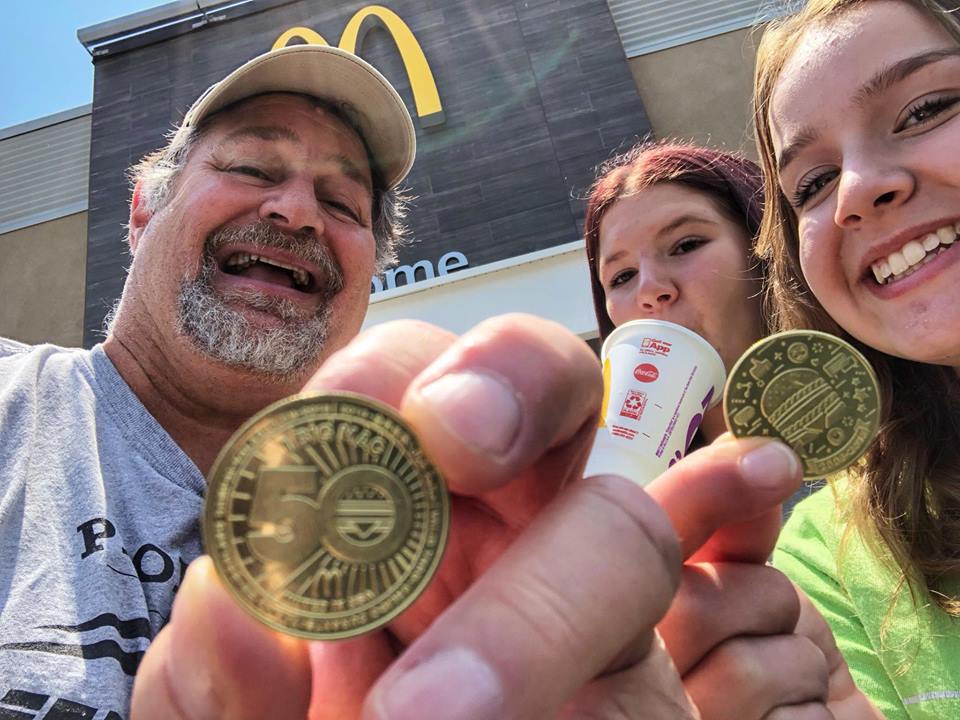 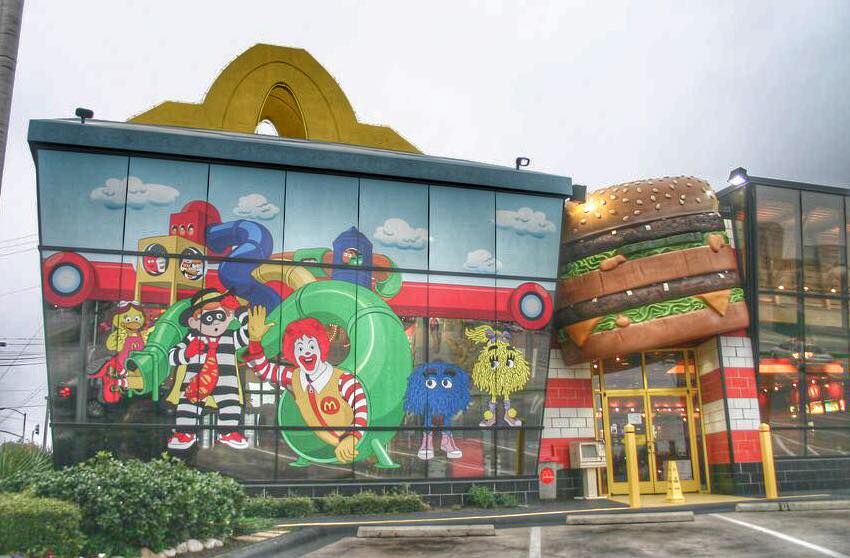 The McDonald’s Restaurant design near the Galleria in Dallas up until December 2017. 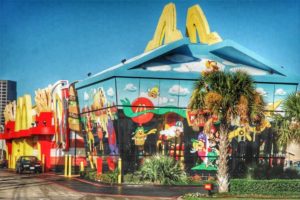 Another view of the former design

To further tell the story, I had done some research and discovered that one of the most unique McDonald’s restaurants in the world was actually in Dallas and so we took the nearly 40 minute drive down there to go see this McDonald’s that looks like a giant happy meal with a giant Big Mac. I thought it would be a perfect backdrop for showing off our new Big Mac Coins on the Big Mac 50th birthday! Much to our surprise, that particular restaurant design was no longer there and when we went in to ask about it, we were told that the store had been remodeled in December 2017. Sadly, the eight or nine different websites that had pictures and told about the unique design of the former restaurant were not apprised of the changes and had not done any follow up to verify. We drove 40 miles from Fort Worth to go there. Sadly JSP Management (the Franchisee for the DFW area) never bothered to share the information….. A wasted drive of 80 miles…..  Interestingly, the manager there told me they get a few people everyday that come in and ask what happened.  SAD. 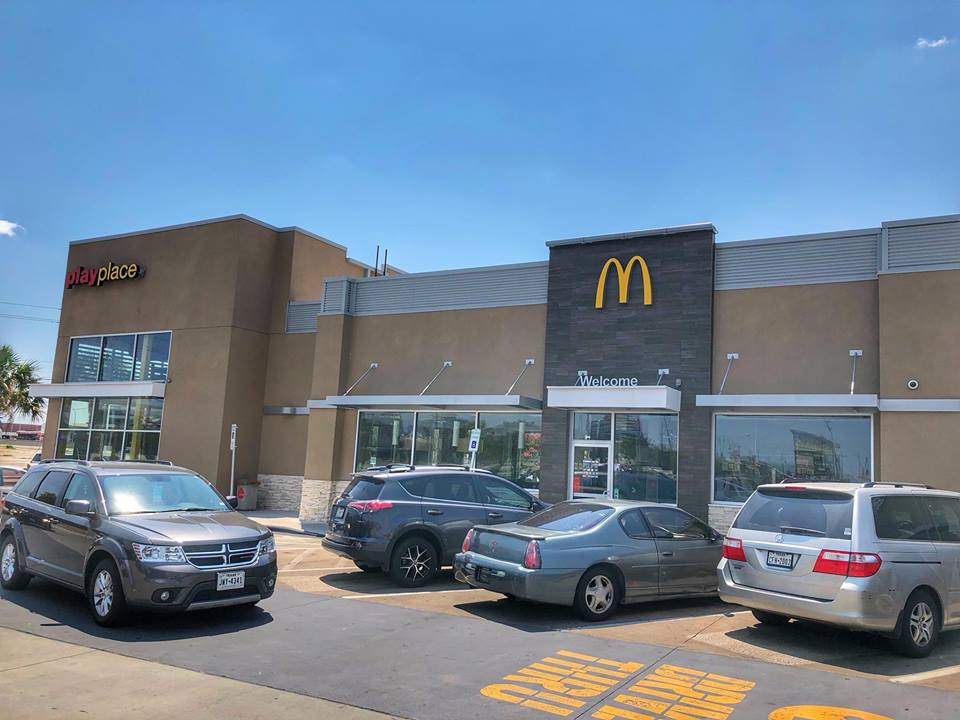 The remodeled design as of January 2018

You can see above what the original looked like and what it looks like today. I guess that McDonald’s would rather generesize their stores so, like their basically non-descript generic burgers, their stores to are all non-descript. That too is sad.

All said, I do have two different coins and I am happy about that. And that’s all I’m going to get it because I am not going for any more Big Macs today!  Chances are they will all be gone over the next day or two.