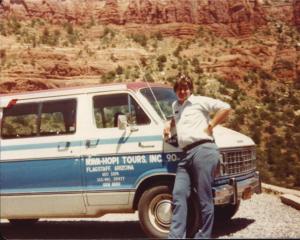 In the early 1980s I was a tour guide for a company called Nava-Hopi Tours in Flagstaff, Arizona.  I was blessed with the opportunity to take hundreds of people all over northern Arizona to places like Monument Valley, the Navajo and Hopi Reservations, Sedona and a number of national parks and monuments. (more about this on my Less Beaten Paths Blog in a #TBT special post)

In 1983 I had a writer named Lea Lundberg from Arizona Living Magazine take a tour with us and she wrote a nice 2 page spread about it, including a number of quotes from me.  Following is a Flipbook with the actual article from July 1983. (Note that I am using a demo version of Flipbook Software, so there will be an obnoxious ad in the middle…)