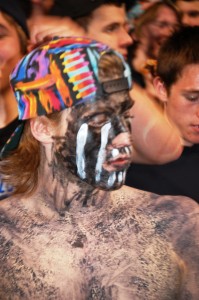 March is the time of year for Basketball Tournaments – we all know about the NCAA National Championships – the brackets, the wildness, the March Madness.  But, these trickle down to other levels as well.  And I have been fortunate to be a participant of these at many levels. 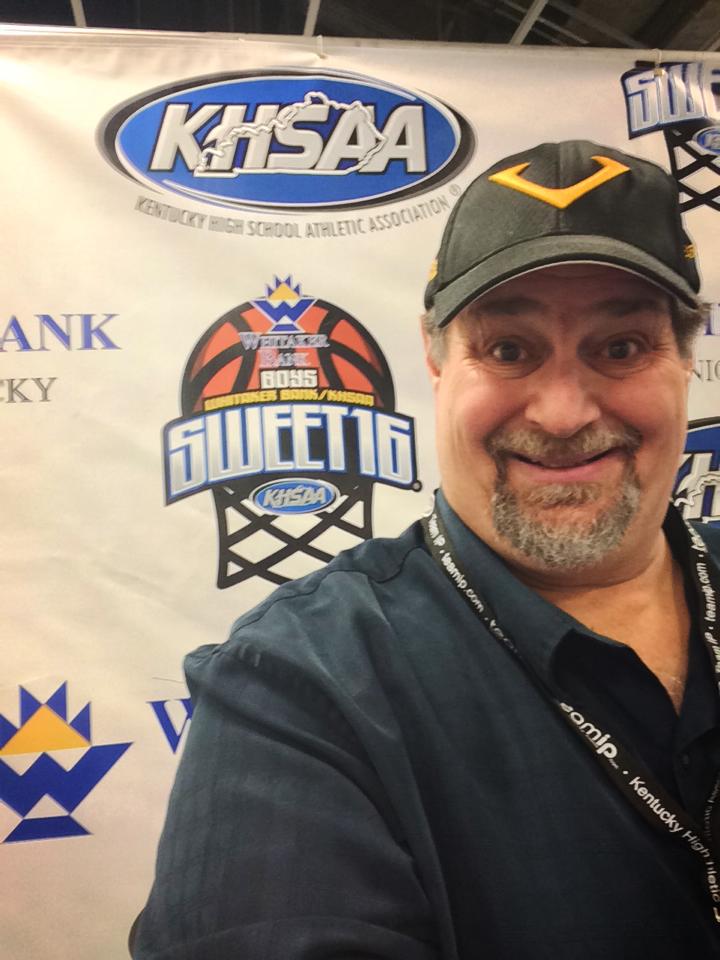 Last week I worked with my friends at PrepSpin.com to assist in broadcasting the events of the KHSAA (Kentucky High School Athletic Association) Boys’ Sweet 16 Tournament held in Rupp Arena.  Today, when people around the country hear the term “Sweet 16”, they typically think of the quarterfinal round of the NCAA Tournament.  What most people may not know is that the term “Sweet 16” originated in 1918 in Kentucky (and the KHSAA actually holds a trademark on the phrase – they got it in 1988).  The KHSAA has licensed the use of the term to the NCAA as they split along high school and collegiate lines.  The term “March Madness” did not originate with the NCAA either. The Illinois High School Basketball Championship was the first tournament to be called ‘March Madness‘. The term was first used about the Illinois tournament in 1939 (coined by H.V. Porter to capture the spirit of High School Basketball Tournaments), decades before it was used about NCAA basketball tournament.  The IHSA has a nice writeup about Porter and his coining of the term. 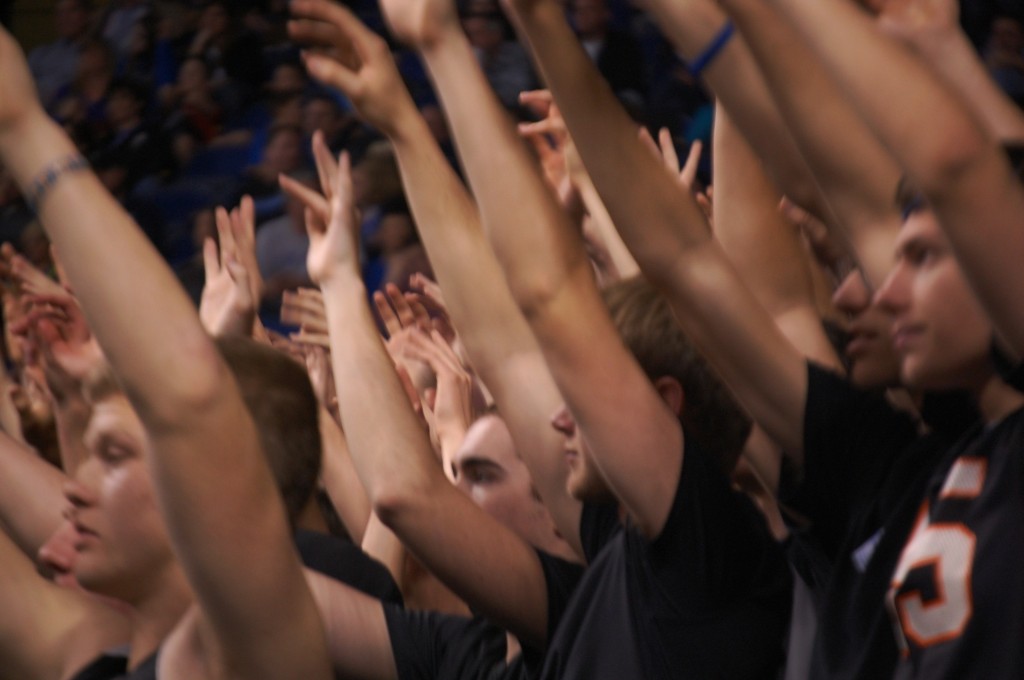 Indeed, the basketball tournaments, from High School, to Junior Colleges (see the NJCAA Men’s National Basketball Championship Tournament) to the NCAA are not only known for their great basketball, but for their fan craziness!  These have become big events with mascots, inflatables, half time shows and competitions, etc. 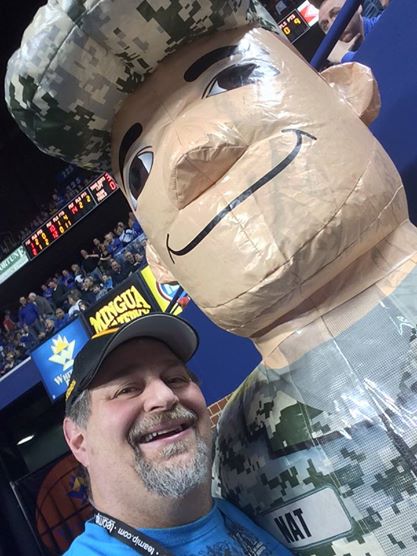 Sumoflam and the National Guard guy at KHSAA Sweet 16

My first real experience with these at any level was back in 1972, while a sophomore at Charles M. Russell High School in Great Falls, Montana.  I was in the Marching Band there (played saxophone) and we ran the concessions for the games.  Because of the nice domed arena the school had (one of the nicest in the country at the time), many of the state tournaments were played there.  I ran the “hot dog steamer” post during these events.  It was always an exciting time.  Even then, the fans were crazy!! (And the Hot Dogs were awesome!) 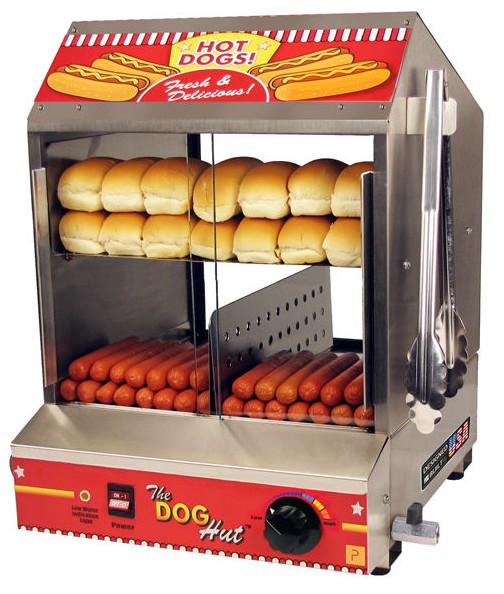 My next opportunity to really enjoy March Madness was when I got tickets to attend the BYU vs. Xavier game at Rupp Arena in March 2007. What a game that was (though BYU lost 79-77).  It was an exciting time to be a BYU Fan. 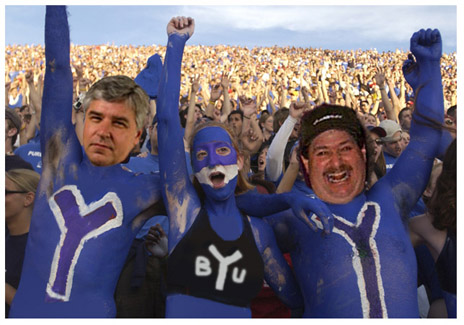 A mock up with my friend Glen Krebs — March Madness

During my employment at iHigh.com I had the opportunity to work with the NJCAA (National Junior College Athletic Association) and managed the initial setup of their NJCAA-TV internet broadcast program.

The glowing crown jewel for the NJCAA was their Men’s and Women’s National Basketball Championships held in Hutchinson, KS (for the Men) and Salina, KS (for the Women).  As the manager of the NJCAA program at the time, I journeyed to Kansas and oversaw the production of the broadcasts of all Men’s and Women’s games.  This was a lot of work, but it was also loads of fun with all of the activities and excitement. 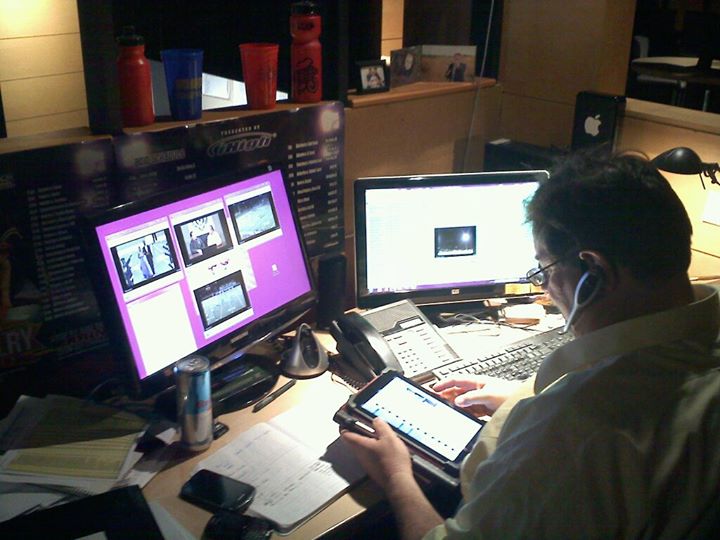 Practicing the art of Monitoring Broadcasts 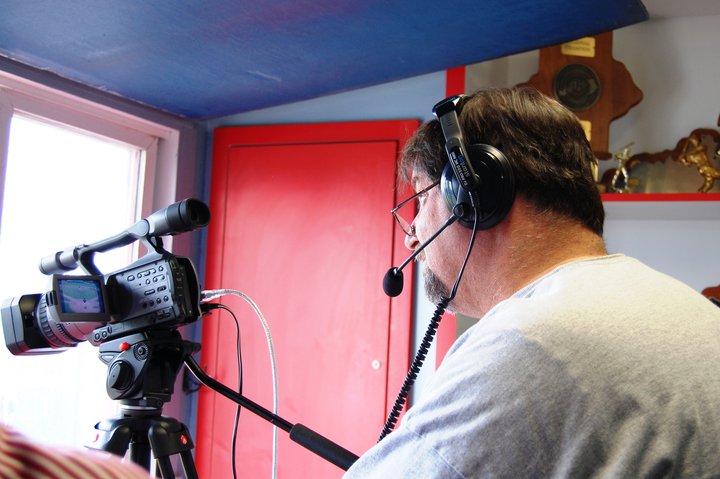 During my time at iHigh we also broadcast all of the KHSAA tournaments, but I typically stayed at the office to monitor the broadcasts, so I never got in on the excitement.  But this year I did.  The games were all fun, but, it is the “Madness” part of March Madness that I got into…. 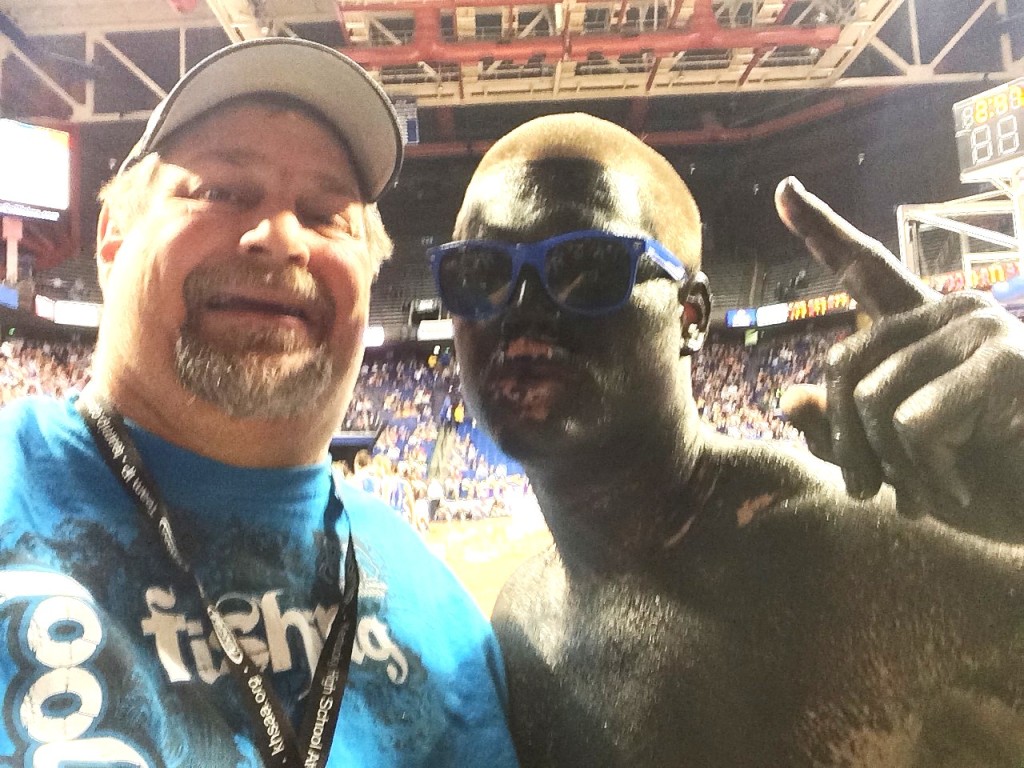 Getting in on the madness with CovCath cheerleaders (man in black)

The event started with 16 Teams and ended with 4 last Friday, including Scott County (my good friend Mike Ritchie broadcasts for them and my daughter in law Holly graduated from there), Trinity (from Louisville), Covington Catholic (the Cinderella team) and Bowling Green (also a Cinderella).  The two Final Four games (the official NCAA story is that “Final Four” was coined by a Cleveland Plain Dealer sportswriter, Ed Chay. In a 1975 article for the Official Collegiate Basketball Guide, Chay wrote that Al McGuire’s Marquette squad “was one of the final four” in the previous year’s tournament. Something about the phrase struck a chord with the NCAA’s marketing folks, and they started capitalizing it as “Final Four” in 1978. It is, of course, now trademarked.) 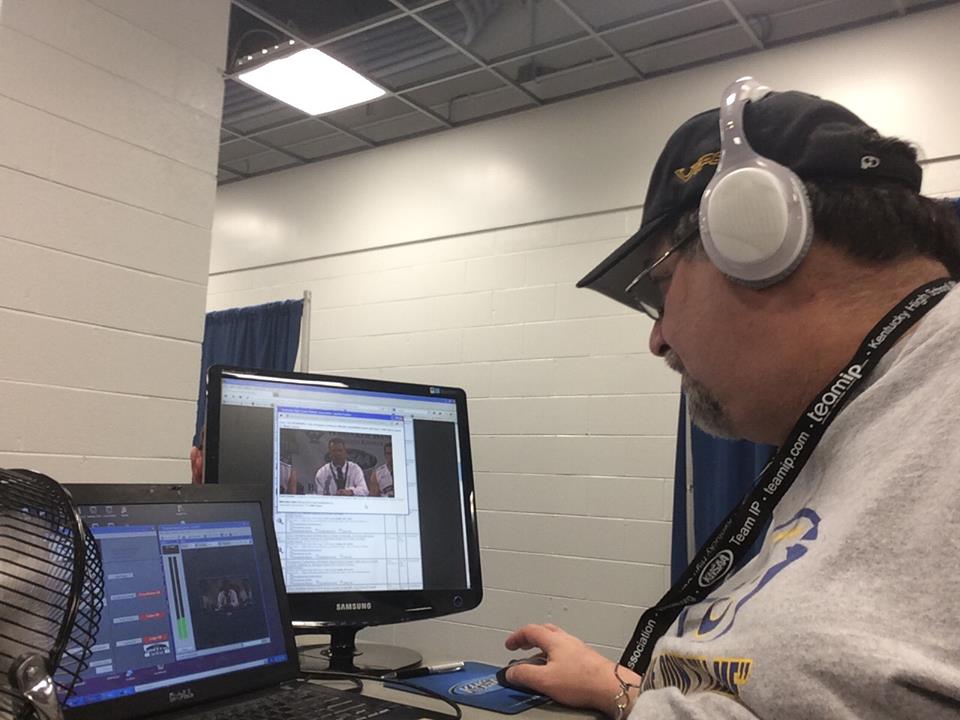 Broadcasting the KHSAA in March 2014

During the 2014 KHSAA Sweet 16 I worked in the bowels of Rupp Arena where I was responsible for the broadcasts of the Post Game interviews through the semifinals.  I also provided live Tweets for VYPE Magazine of Louisville. (I manage the VYPE.com Network websites). Scott County outlasted Trinity and then Covington Catholic came on strong against Bowling Green.  But, the real interest to me was the CovCath Student Cheering Section (affectionately known as the “Colonel Crazies“).  In the first two games they rocked and shook the arena.  I never really got to see them the first two times around, so I decided to head out during the semifinals.  They were all coordinated…dressed in black and their cheering and movements all seemed practiced and choreographed.  CovCath is an all boys school so these guys were rambunctious and fun loving! 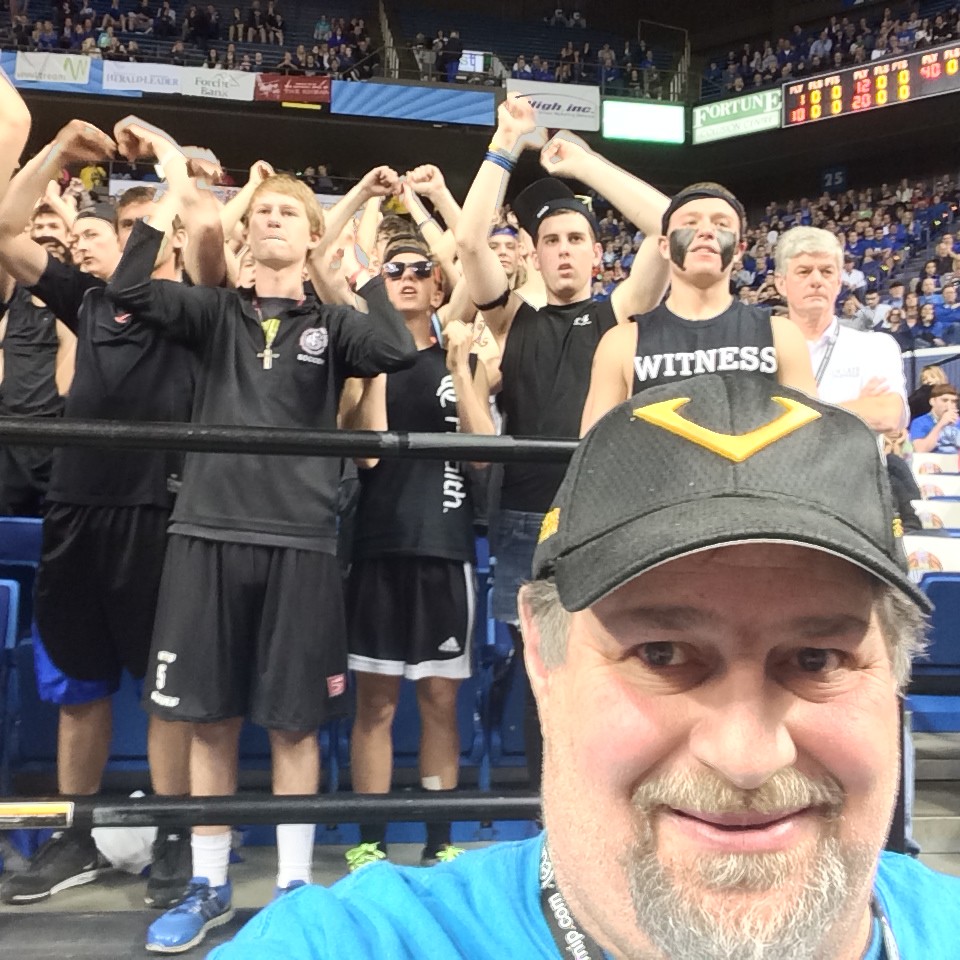 Sumoflam (in his VYPE hat) and the CovCath Colonel Crazies 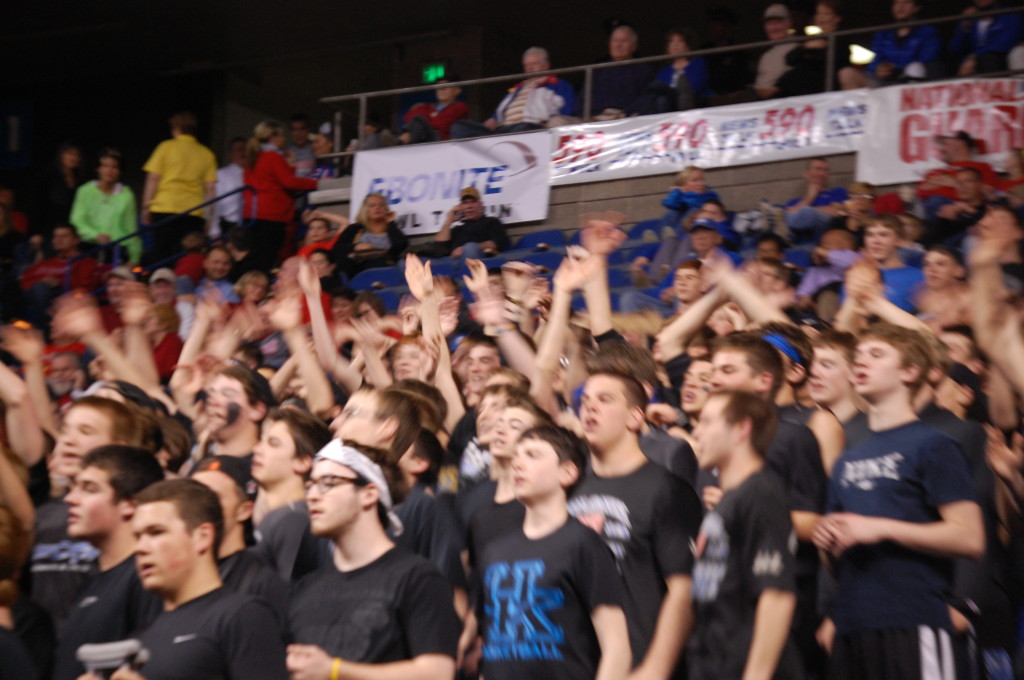 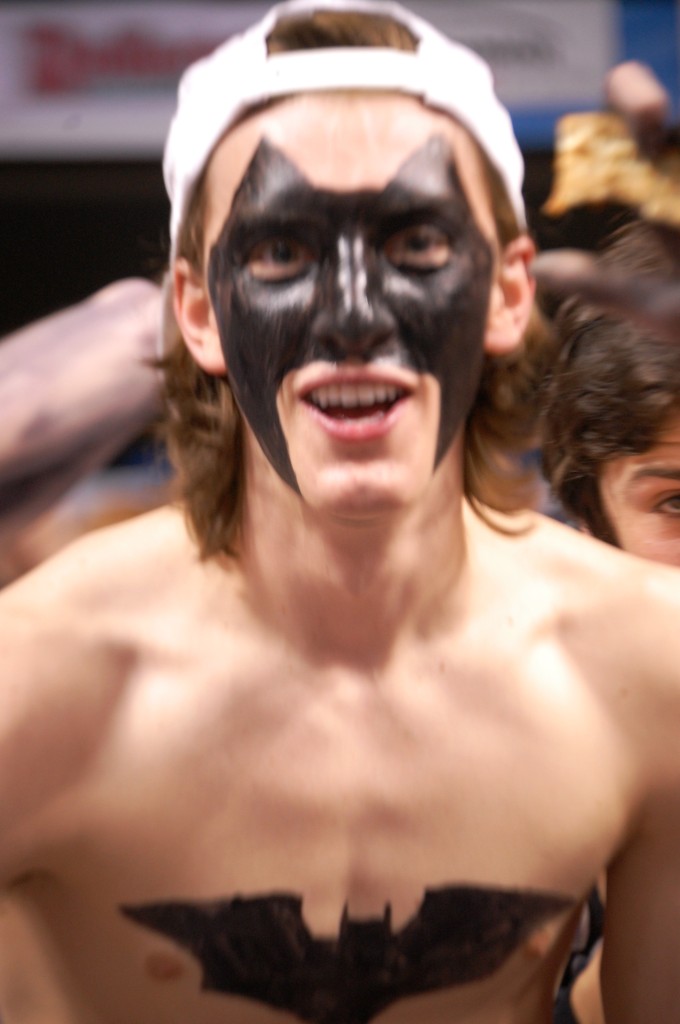 A “Batman” from CovCath during the semifinal game 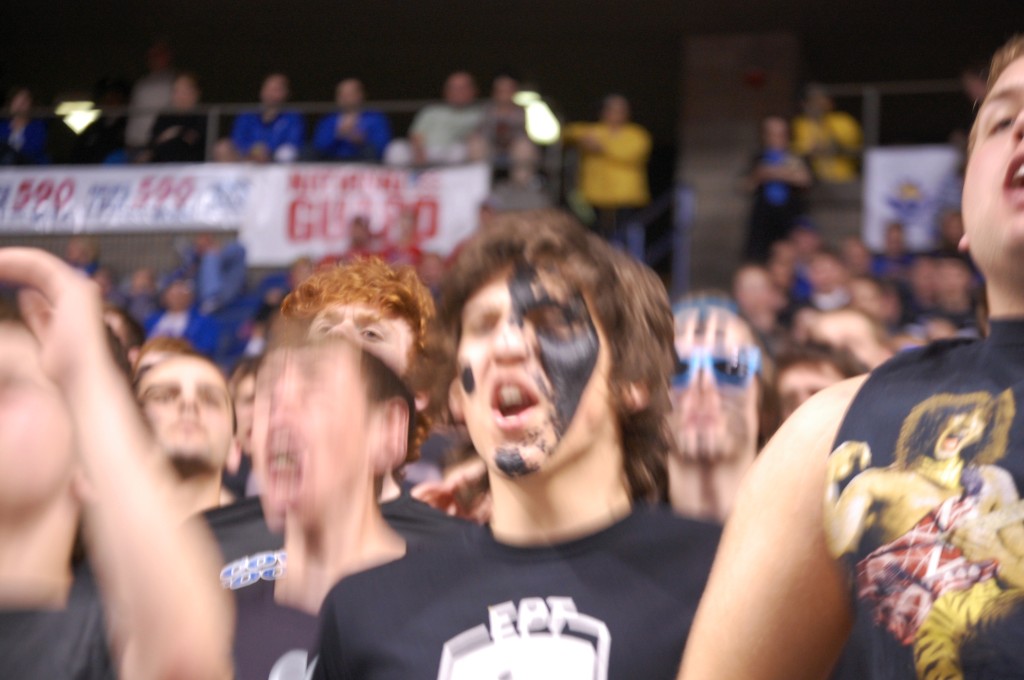 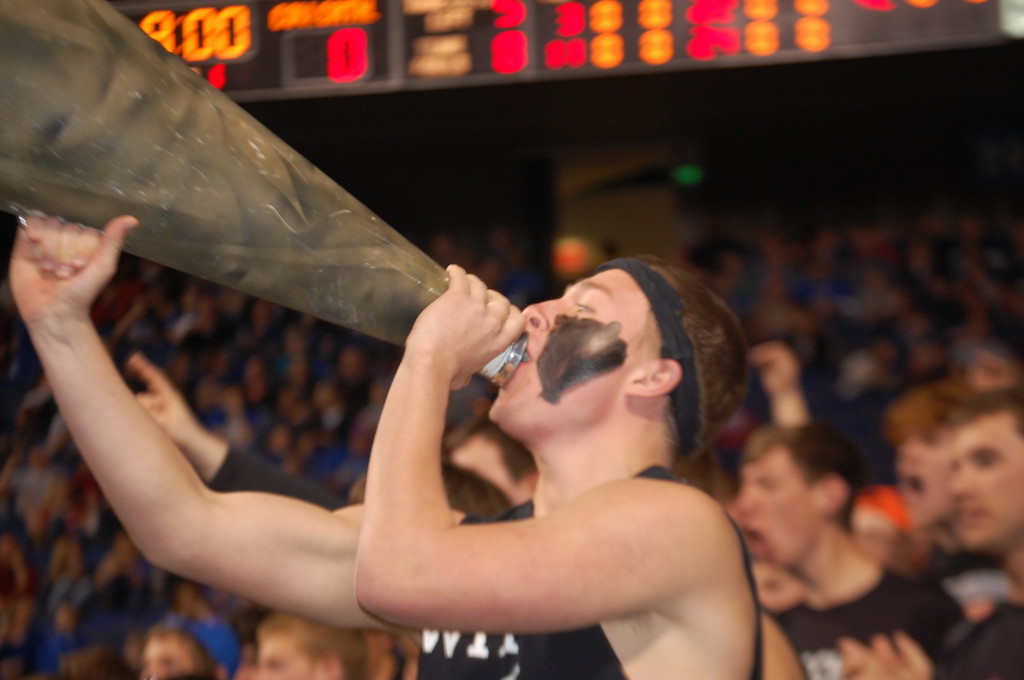 Cheering on the Colonels of CovCath

During halftime the wave went around the arena but when it hit the CovCath boys they had “fast” waves and “slow motion” waves as well.

The following video then shows their Fast Motion waves as well as some real FAN excitement.  This was one of my iPhone videos I uploaded to YouTube.

As well, at halftime, and to the delight of the CovCath boys, Cincinnati restauranteur Jeff Ruby (owner of Luxury Steak House Jeff Ruby’s chain) bought pizza’s for each of the boys in the cheering section pizza (apparently 119 pizzas). 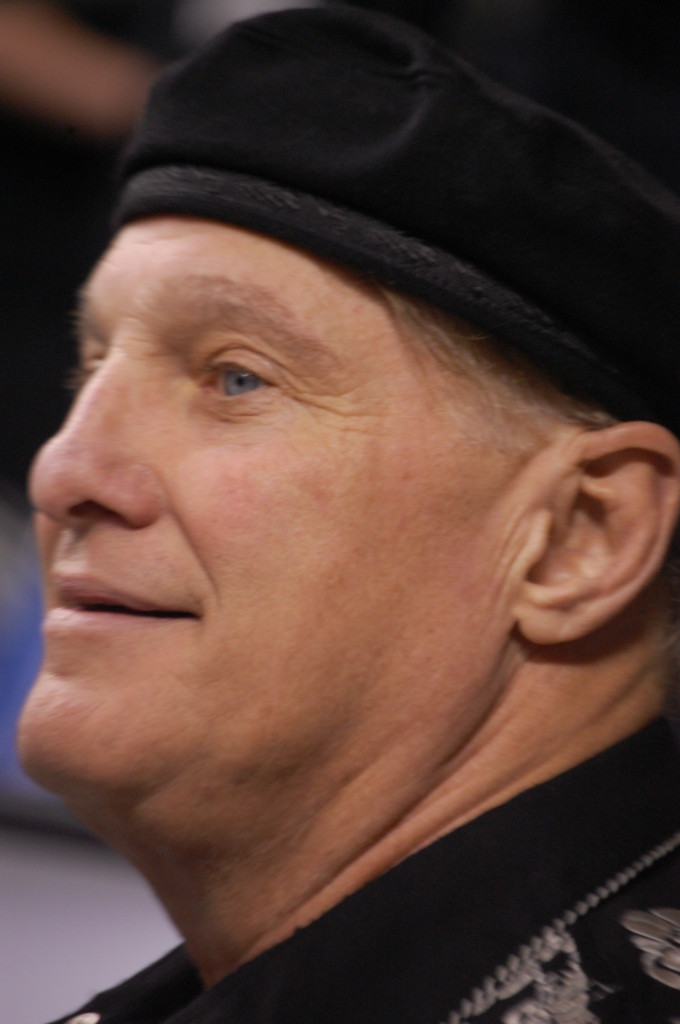 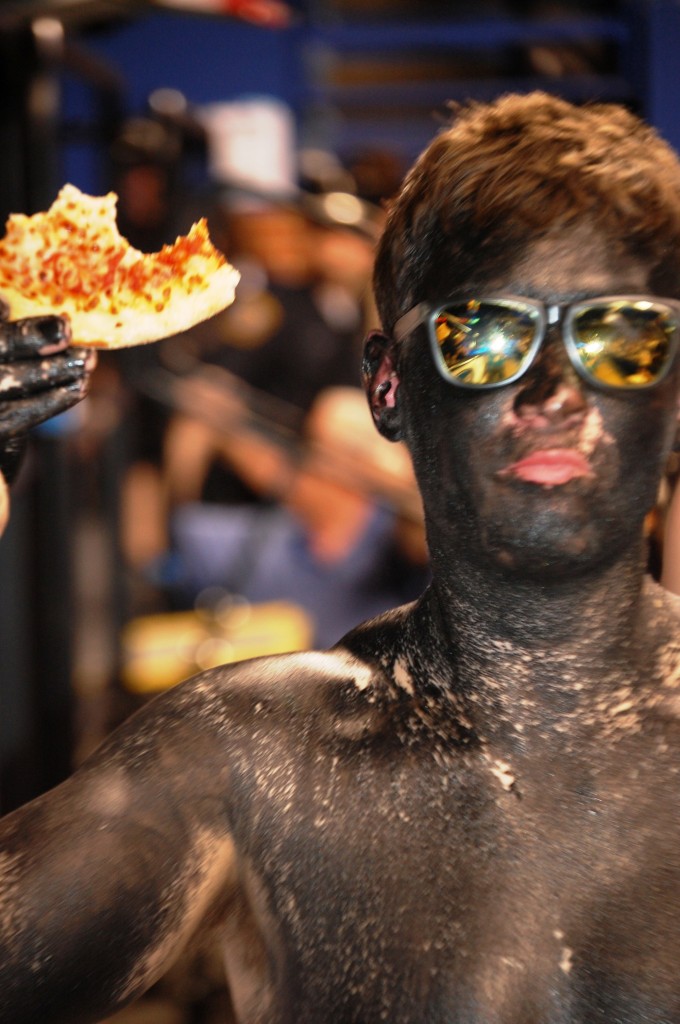 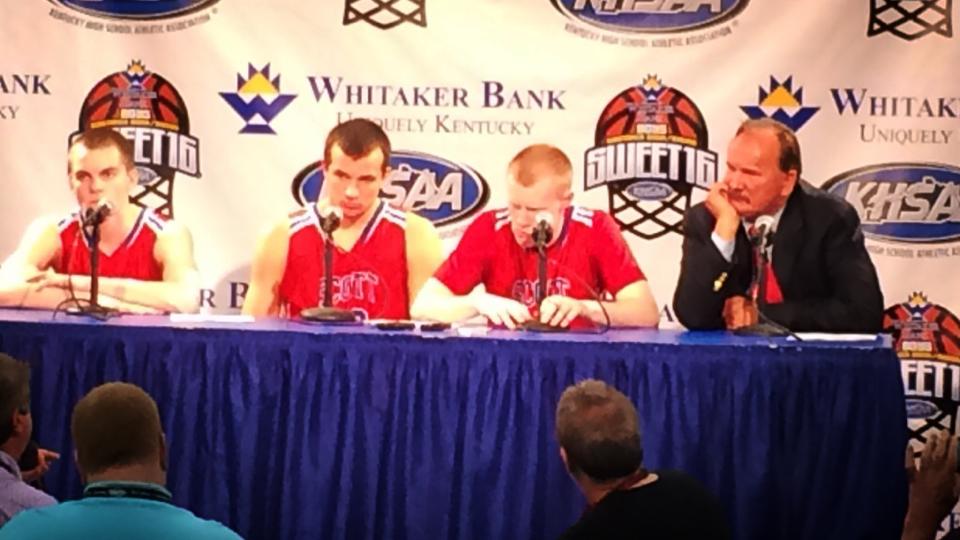 In the end the Championship game was all is was touted to be.  Scott County took off strong but CovCath fought back and at the end of the clock they were tied and headed to overtime.  CovCath continued their end of the game hot streak by defeating Scott County 59-51 in overtime.  And, as Jeff Ruby noted on his Twitter site, they couldn’t have done it without the support of the Colonel Crazies. 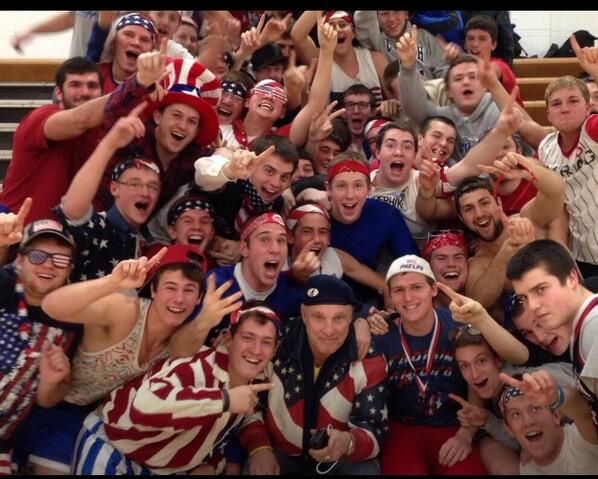 Though I was rooting for Scott County, I am happy for the CovCath Colonels.  Having been ranked to finish 5th in their region, they came out on top then came to state as an underdog and proved their worth.  Their determination and hard fought basketball (and their Free Throws!!) won the game for them. 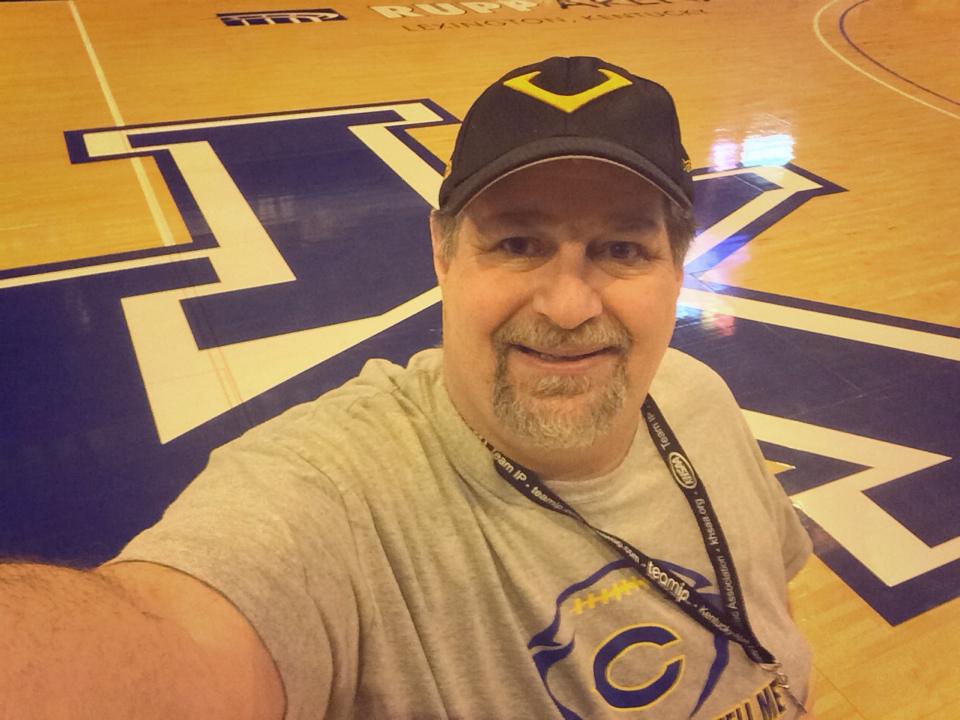 Now to get ready for the NCAA Sweet 16 game when University of Kentucky takes on Louisville….an in-state rivalry playing their game in Indianapolis later this week.  GO CATS!!