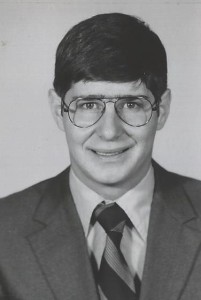 My passport photo for my LDS Mission, taken in February 1976

There are some events in one’s life that are turning points…big decisions that impact the remainder of one’s life.  Today I celebrate the 40th Anniversary of one of those events.  It was 40 years ago today that I entered the Language Training Mission (LTM) in Provo, Utah to learn Japanese and prepare to serve as an LDS Missionary in the Japan Nagoya Mission. This singular event would literally have a myriad impacts on the direction of my life, the life of my wife and of my children.

Prior to this event only three real others were as momentous…my mother taking me away from my father and moving to New Mexico (something that I had no control over but had a massive impact on my life), my decision to convert to the LDS Church in 1975 (and thus be asked to leave the house at age 17 as a result) and then the actual decision to serve versus the decision to take what would have been a high paying job in 1975. 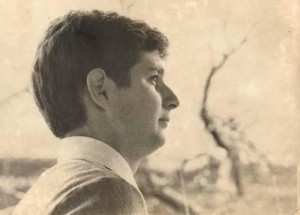 With each decision made at a crossroads in life (or a fork in the road of life if you prefer), a whole string of consequences unseen is set in motion (until the next crossroad, which then again leads to another set of unforeseen life events). But this mission to serve the Lord in Japan (not to mention all of the service to the Japanese people) had a profound impact on my life, my testimony, friends I have made and, ultimately my career choices. And, as I approach my 60th of year of life, I can look back and consider all of the things that WOULD NOT have occurred in my life had I not made that one decision. Honestly, I am awestruck. 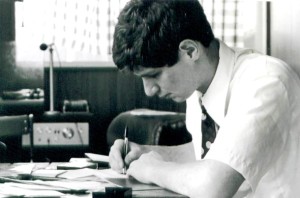 Over the course of my mission I wrote over 1000 pages of journal entries and dozens of letters home to family and friends.

“Today was my first day.  It was really great. We had many inspiring talks and learned much about the mission and mission fields.  Elder Stewart Simons from Cyprus High and Elder Marc White from Murray were my fist companions. Elder Marc and I went to school together, so its a real blessing. Its been a tough, long, hot day, but a very meaningful one.I’m so grateful to serve the Lord.”

My two LTM Companions as they looked in 1976. This was scanned from my Missionary Journal. 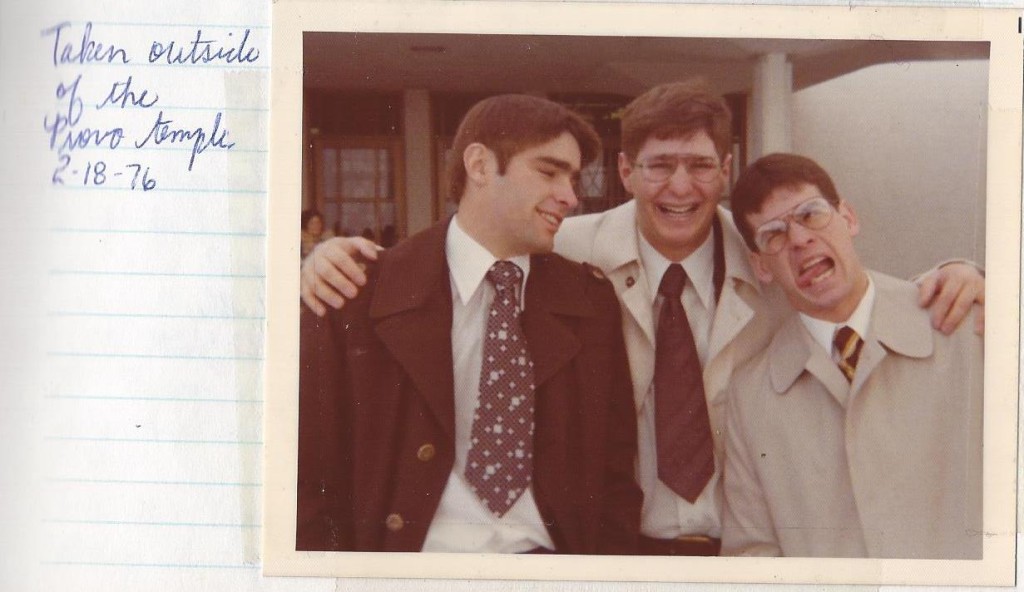 Hanging with Elder White and Elder Simons at the Provo Temple on Feb. 18, 1976

I learned from both Elder Simons and Elder White.  It was nice to have one of them as someone I knew.  I was a stranger in a strange land.  Later on in Japan, Elder White became my zone leader and we grew very close.  We have stayed in touch casually over the years.  He was a real blessing to me. 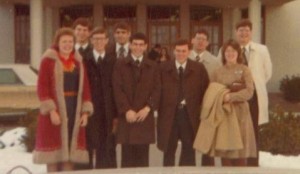 I was one of many in the group to enter the LTM that day.  The LTM was in an old Catholic School in Provo that the Church had purchased.  This was before the days of the Missionary Training Center (MTC) and just shortly after the days of the Japanese LTM being in Hawaii.

In my District I had four other Elders including Elder Bartholomew from Rancho Palace Verdes, CA; Elder Bateman from Edmonton, AB; Elder Hadley from Sandy, UT (who I am still in contact with after all these years); and Elder Call from Heber City, UT. (see the photo above)

On February 14, 1976 I wrote: “I am so happy that I’m here at this time to be able to work together with other elders and learn Japanese and the Gospel of our loving Father. The LTM is really an experience with 20 elders to a room, two districts to a room. I am really learning to love other elders. Especially those in my district and especially Elder White and Elder Simons. I’ve learned many new phrases and words.  Today we learned our testimony and a simple prayer.  I’m trying to memorize it, but its hard. I do have my testimony memorized.  I am praying muchly now so that I may be closer to the Lord.” 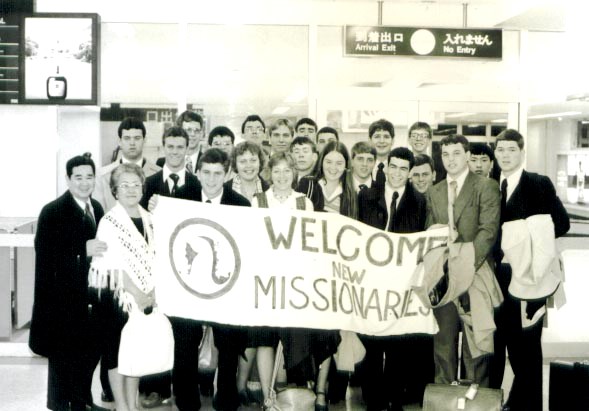 Being welcomed at Nagoya Airport by the Mission President Satoru Sato and his wife, along with some other Nagoya Elders already serving. April 14, 1976 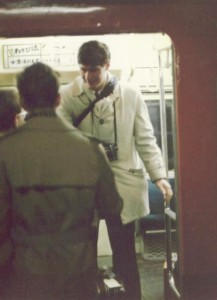 I could go on and on about the experience in the LTM.  It was a learning experience in so many ways. But, eventually it was over and on April 13, 1976 we all left for Nagoya, Japan.  I had never been on a 747 and never flown overseas. (I’ll actually write more about this on my Countdown Day #173).

During my missionary days I served in the Japan Sea side towns of Kanazawa, Fukui and Takaoka, as well as in Ogaki (near Gifu – where my daughter Amaree served part of her mission in 2001 and 2002), Nagoya and the lovely town of Fuji City at the base of Mt. Fuji.

I met an extraordinary number of wonderful Japanese Latter-day Saints and myriads of other lovely Japanese people.  I learned about Buddhism and Shintoism.  I learned and excelled at the language.  It was a wonderful experience. 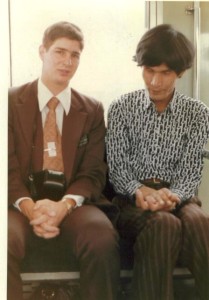 Accompanying a blind investigator on a train. Like today, I almost always had a camera with me.

Following are a few more photos from my mission.  I have hundreds. My first “selfie” is also included. My mission was a blessing in my life in so many years.  I am humbled and grateful to be celebrating the 40th Anniversary of beginning this amazing adventure and am really touched by all of the sweet memories flowing through my mind as I reflect back.

A few years ago we had a Missionary Reunion in Salt Lake City and I was able to catch up with many of those with whom I served during my two years from 1976-78.  It was wonderful to catch up with them and see where their lives had taken them. Some have been very successful, others not so much.  Some of those with whom I served have gone inactive or even left the LDS Church.  These things happen.  But, I cherish the friendships and, even today, stay in touch with many of these former missionaries (Thank you Facebook!!), even those that are no longer associated with the church.  A mission does amazing things to one’s life. 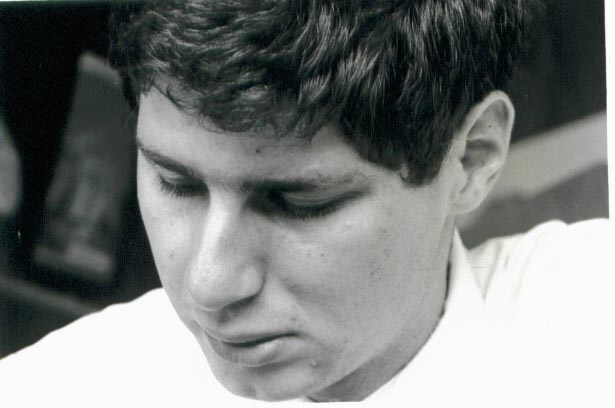 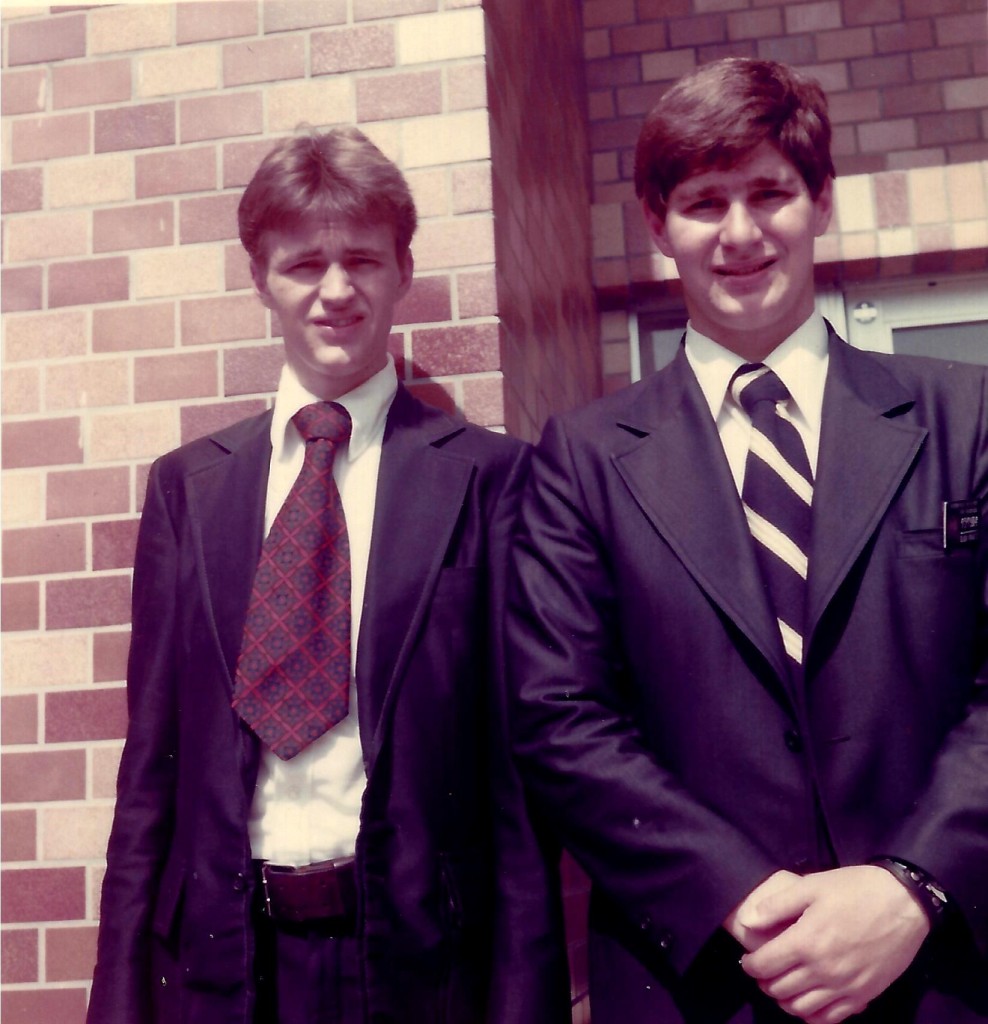 My first companion in the field, Elder Fullmer from Utah. This was in Kanazawa in April 1976 (Dig those 70’s era neckties!!) 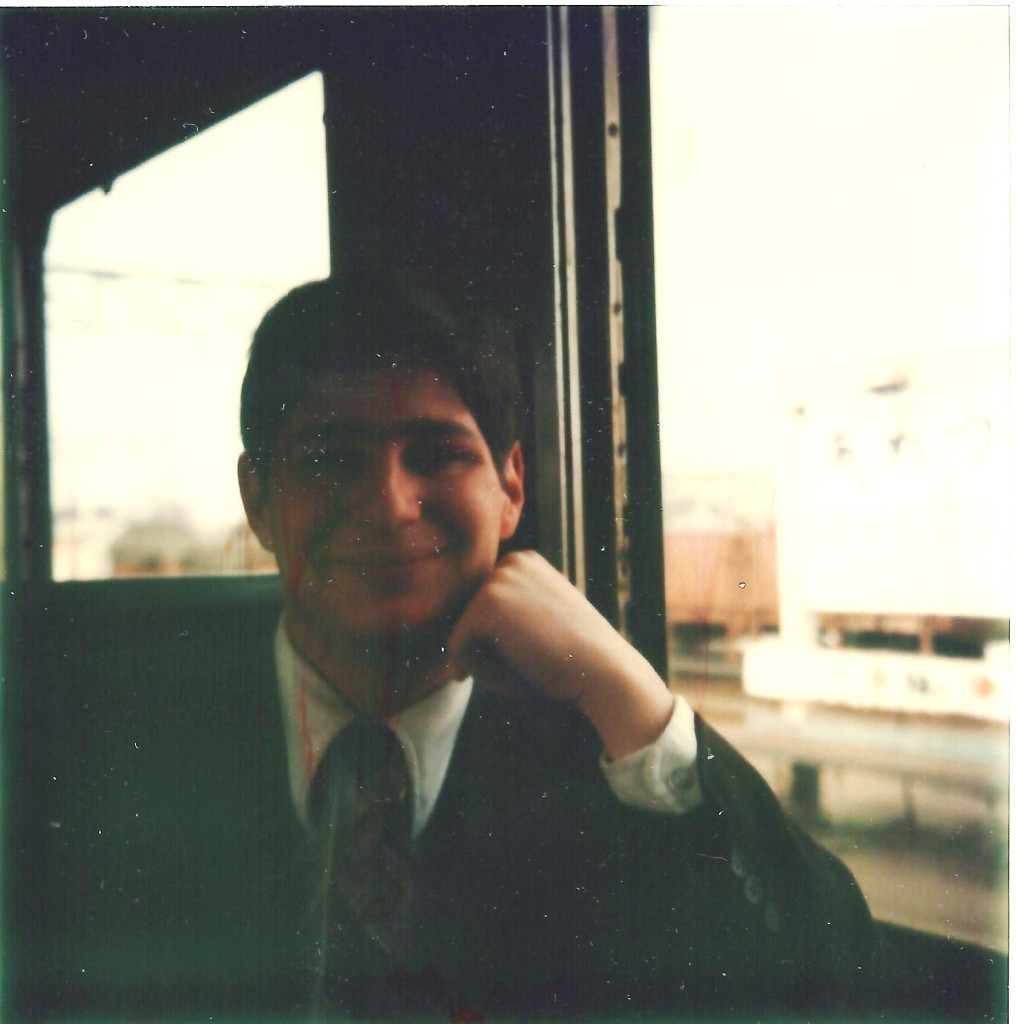 Riding a train – an almost daily occurrence in Japan 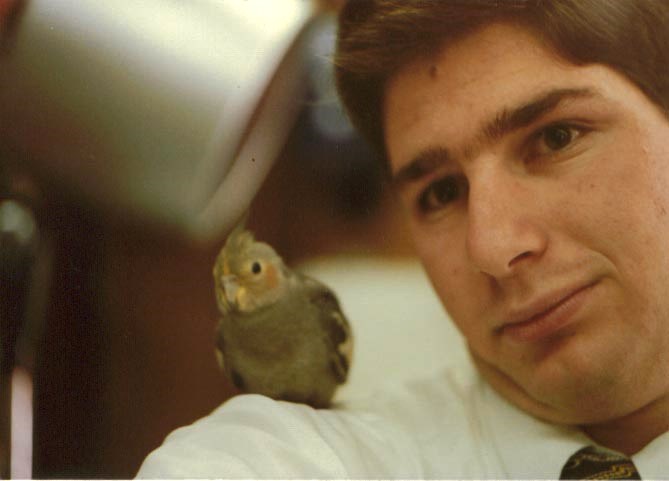 My fist selfie! Took this in the mirror at a barber shop after the bird landed on my shoulder. 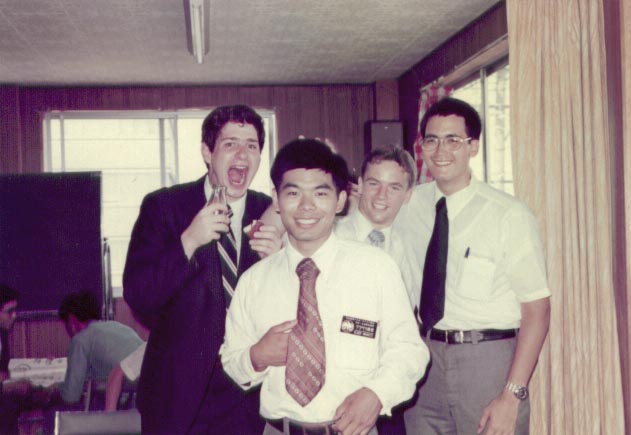 Fooling around with the Ogaki Elders in 1977 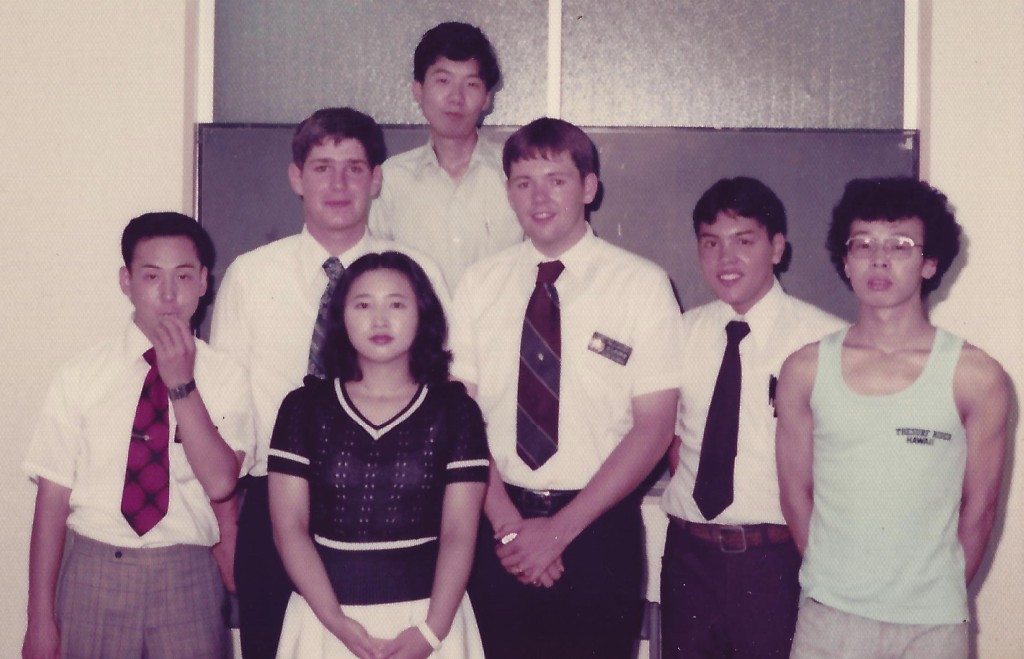 With Elders and some members in Takaoka, Japan in the winter of 1976 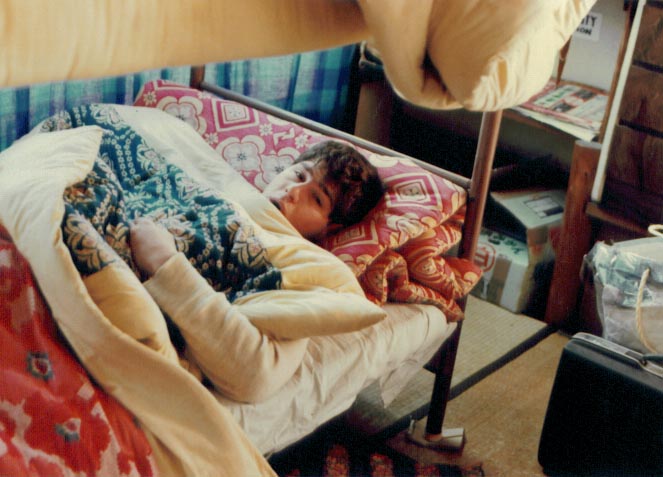 Lazing in bed on a cold morning (we had no heaters – just oil stoves that had to be turned off at night). This was in Fuji City in January 1978 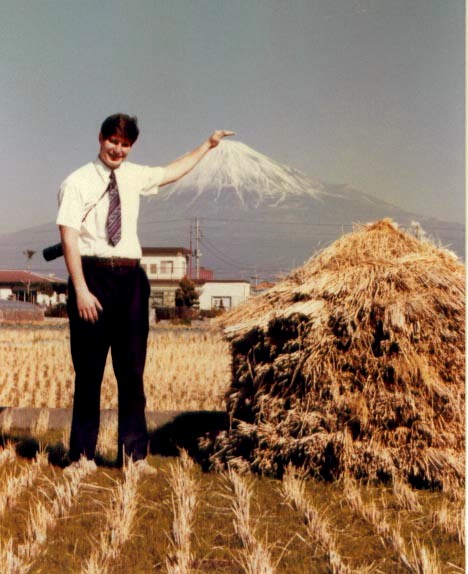 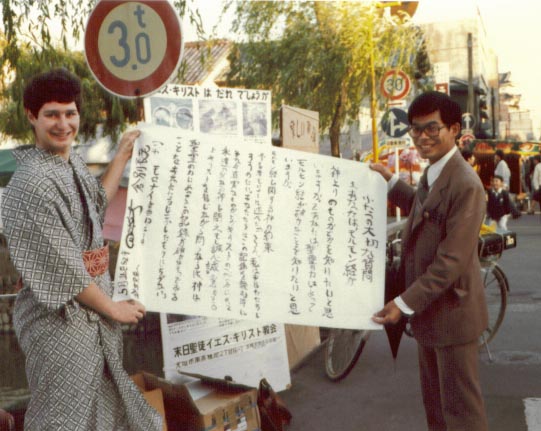 Street “Dendo” (Proselyting) in Ogaki, Japan in 1977. I wrote all of the Japanese on the poster while dressed in the Yukata 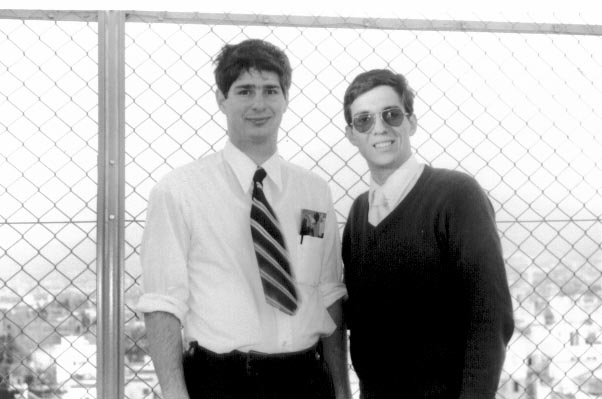 With companion Elder Lee Richan. We had become very close friends over the years. He passed away a couple of years ago (2013) 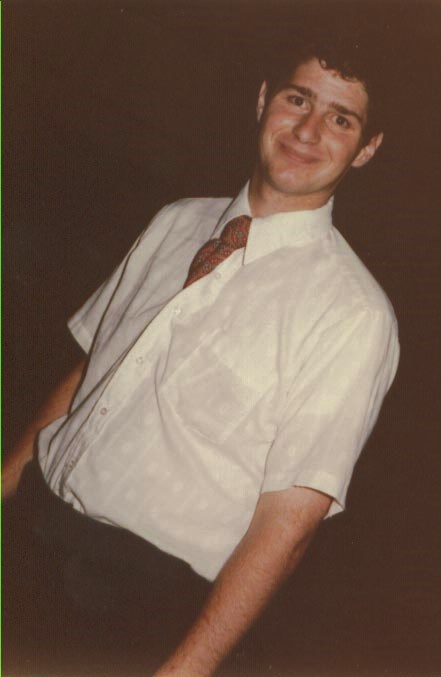