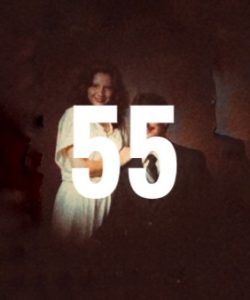 Julianne has an assortment of talents, many which I’ll cover in later posts. Perhaps one of her most recognized talents is her finesse at the violin.

I remember with fondness hearing her play “Meditation “ by Thais every time we would visit her home in Mesa.  It was her Dad’s favorite and has become one of mine as well.  Indeed, in my mind, it is Julianne’s Theme Song.

Julianne grew up in a family that emphasized music and began the violin in the fourth grade. By high school she was a very talented violinist and,.  She was in the Mesa Symphony.  She went on to Northern Arizona University on a music scholarship.  Later, she played in the Mormon Youth Symphony and the Utah Valley Symphony in Provo, Utah.  It was during her time in these two that I met and eventually married this talented musician. 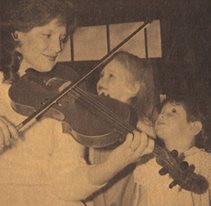 Julianne playing violin for daughters Amaree and Marissa in the 1980s. Featured in a newspaper in Mesa, AZ

Julianne has played violin for many family, church and social functions

We eventually moved to Flagstaff, where I attended college.and Julianne was able to play in the Flagstaff Symphony Orchestra. Ironically, at that time, a violinist named Daniel Mason was the concertmaster. In the 1990s, after moving to Kentucky, it turns out that Daniel Mason had become an Associate Professor of Violin at UK and Julianne took lessons from him.  Such a unique small world it is! 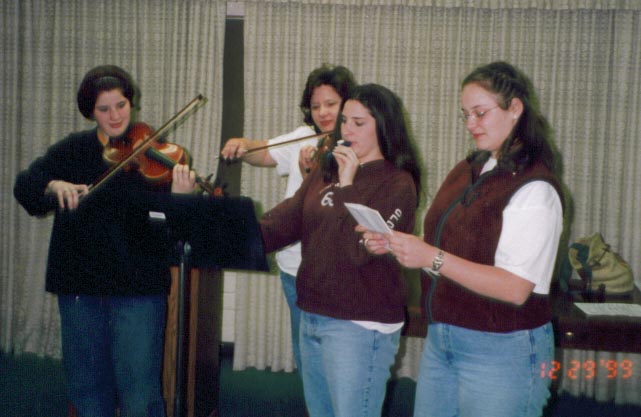 Julianne performing with her daughters, including Chelsea on the violin.  Christmas 1999

Due to Julianne’s love of music and the arts, her talents have carried on to two generations as her children have taken on musical talents and then passed them down to their children as well. Our oldest daughter Amaree graduated from UK with a music degree and is now conducting choirs and teaching piano in Washington. Marissa was an All-State Singer. Chelsea played the violin in high school and has since taught herself guitar and piano. Seth performed in choir in high school and was in the men’s choir at UK. He too has taught himself guitar. Solomon also has a fine singing voice, though his real talent was art (as was Marissa’s).

Amaree conducting a combined choir in 2019 honoring Armed Services Day — the LDS Stake Choir from her stake, the Unitarian Universalist Choir and the men of the West Sound Chorus 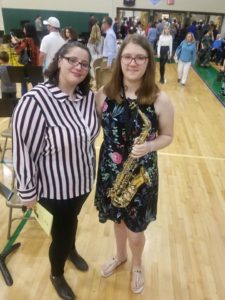 And, as mentioned above, many of our grandchildren carry on traditions as singers, a violinist, a cellist, a percussionist and a saxophone player. Two of the grandchildren also perform with the Lexington ballet.

Our oldest grandchild Autumn has taken up the saxophone (and Grampz is happy about that since he too was a sax player).  She has thrived.
Amaree’s three oldest are all becoming talented musicians as they each perform well on their respective instruments.
I credit this love of music and the arts to my sweetheart who has sought to engage her children at every opportunity.
Indeed, I am honored, blessed and grateful to be married to such a talented musician who has dedicated much of her life in nurturing a love of music to her children and grandchildren.  This was an unforeseen blessing in my life. 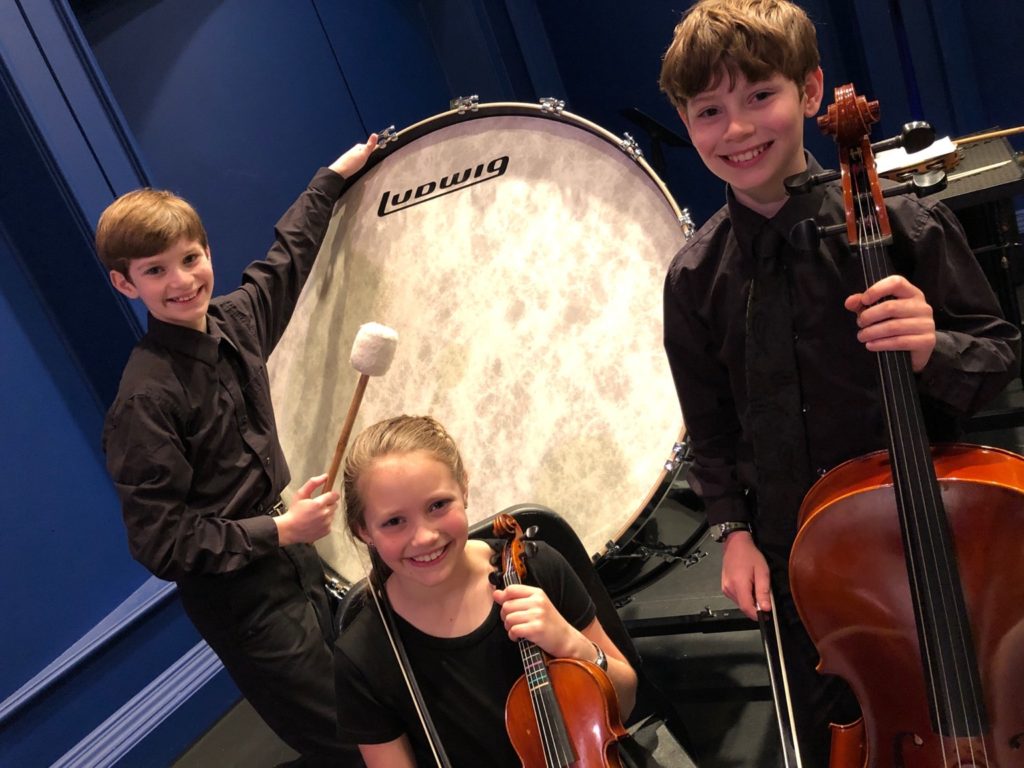 Amaree’s three oldest – Kade on percussion, Livvy on violin and Charles on Cello. 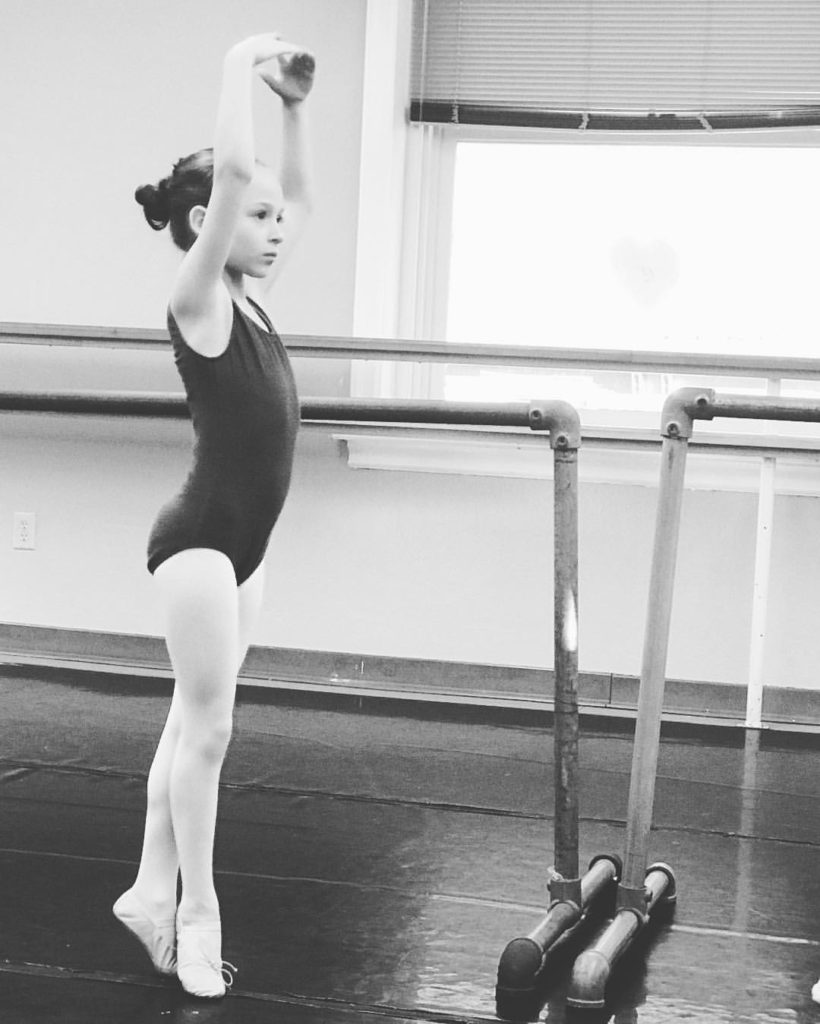 Marissa’s daughter Joselyn has thrived in ballet and has performed with the professional Lexington Ballet Troupe for nearly five years. 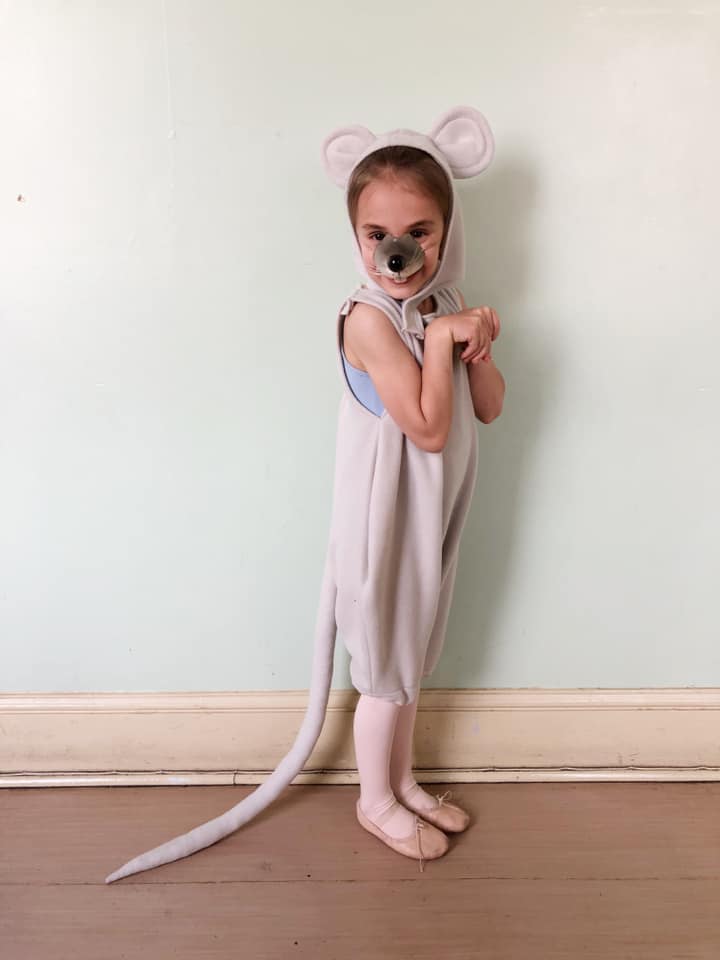 Marissas youngest, Lyla, is also now beginning ballet and performed in the Lexington Ballet Nutcracker in 2018